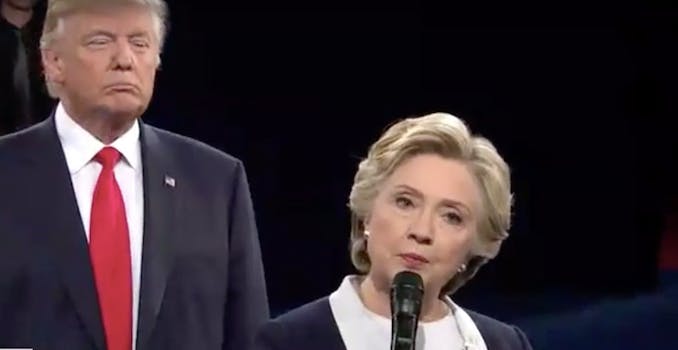 Many call his behavior predatory.

Donald Trump walked into the second presidential debate more sedate than his usually blustery self. But much like the first debate, once it became clear that things weren’t going his way, that a prepared, politically experienced woman was calmly but pointedly taking him to task, Trump appeared to unravel.

He whined to the moderators that Clinton was getting more time than him. He sulked; he raised his voice. Then he pulled the move of a desperate man, a move familiar to any woman who has ever been in proximity of a guy who has lost control of a situation he was sure he had the upper hand in: Trump used his body to intimidate.

While Clinton was busy answering a question about Obamacare, Trump lurked behind her. His 6-foot-2 frame loomed over her. He wanted her to know he was there.

In case you missed it, here's @realDonaldTrump stalking #Hillary on the #debate stage. pic.twitter.com/8mRMOXfiWe

Many were quick to point out that these are the actions not just of a bully but of a predator.

In a debate that began with talk of Trump's sexual predation, note that he is stalking around the stage while his female opponent speaks.

Why are so many men in asking WHY Trump is stalking Hillary on stage? Do they seriously not get that this is what so many men do to us?

Clinton, of course, also noticed his tactics. When asked about it after the debate, she commented, “Well, he was very present.”

Trump’s behavior comes just days after 2005 hot mic recording was released of him making lewd comments in regards to women. In the debate, when pressed by moderator Anderson Cooper about whether he has ever sexually assaulted a woman, Trump changed the subject multiple times and dismissed the footage as “locker room talk.”

“Nobody has more respect for women than Donald Trump,” the presidential candidate has said repeatedly and uttered again at the debate. However, respecting a woman begins, at the very least, with respecting her personal space, her boundaries, and her body that isn’t anyone else’s to grab.