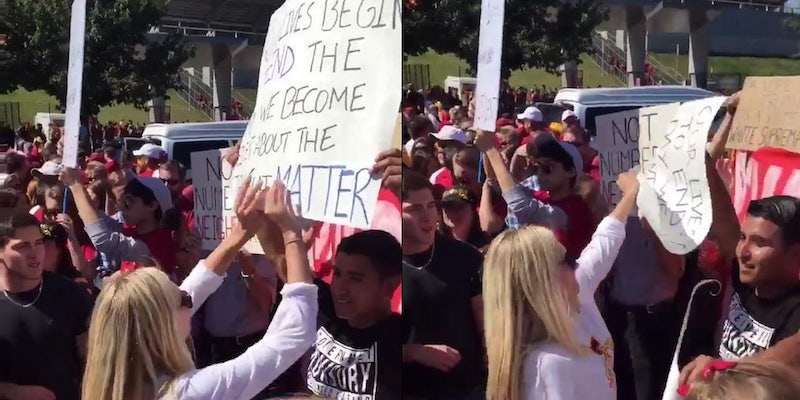 'Our lives begin to end the day we become silent about the things that matter.'

A 20-year-old woman ripped a protester’s sign during a tailgate for the Iowa-Iowa State football game in Ames on Saturday. One that featured a guest appearance from Republican iconoclast, Donald Trump.

Iowa State Daily reports protesters were waiting for Trump at one of Jack Trice Stadium’s parking lots, where the Republican presidential candidate planned to meet with supporters. The protest was organized by Students Against Bigotry, an organization at Iowa State University that protests Trump and advocates for politically correct speech.

Jovani Rubio held a sign that read “Our lives begin to end the day we become silent about the things that matter.” But a West Des Moines, Iowa, woman identified as Shelby Mueller walked up to Rubio and ripped his poster in half.

Other signs read “I did not struggle for 16 years to be called an anchor baby by my future president,” in reference to Trump’s recent remarks.

Iowa State University sophomore Samuel Van Oort went to the tailgate after hearing that Trump was going to be in attendance. Once he got there, he saw the protesters and decided to stand nearby. That’s when he overheard the two women he filmed discussing tearing Rubio’s sign.

“There was a lot of tension,” Van Oort told the Daily Dot. “I overheard these people talking and what they were going to do, so I pulled out my phone.”

Mueller can be seen smiling after ripping the poster, shrugging, and saying, “sorry!” There were cheers from some in the crowd nearby and she walked away.

“The whole protesters’ responses were really good,” he said: They didn’t fight back, but just continued to protest. Rubio reportedly taped his sign back together.

Iowa State Daily also reports that Mueller has contacted Rubio and apologized for her actions.