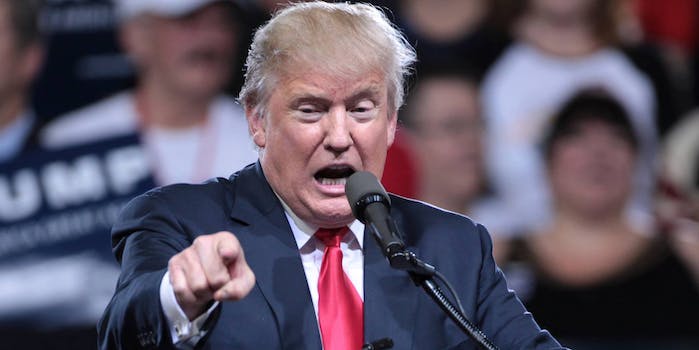 Donald Trump’s defense that he didn’t assault a woman: ‘Look at her’

Women are clapping back against the candidate's latest sexist comments.

This is the thing about Donald Trump: He’s constantly trying to impress you. For instance, you may have thought that after calling Mexicans rapists, insisting the Central Park 5 are still guilty, wanting to ban Muslims, and saying he just loves to grab women by the pussy, he could not stick his foot any farther down his throat. But the man has got sticktoitiveness, and somehow manages to say yet another disgusting thing just when you thought it couldn’t get any worse.

This time, he implied he didn’t sexually harass a woman because she’s not attractive.

According to Talking Points Memo, at a rally in West Palm Beach, Trump addressed the accusations by former People reporter Natasha Stoynoff that he forcibly kissed her while she was interviewing him at his Palm Beach home. “Take a look. You take a look. Look at her. And look at her words,” Trump said. “And you tell me what you think. I don’t think so. I don’t think so.”

It’s sort of incredible how, in one move, Trump judges yet another woman on her looks and perpetuates the harmful idea that sexual harassment is actually a compliment that is only given to conventionally attractive women. Just, wow.

Women have been responding to the remarks with #LookAtHer, which was begun by Fusion reporter Marisa Kabas.

tweet a selfie with the hashtag #LookAtHer. show these men our faces. show them we exist. assault knows no bounds.

Trump wants to make it clear to his supporters. He would NEVER rape an ugly woman #LookAtHer

#LookAtHer, too ugly to assault? My appearance, my body, won't make me too ugly to #vote. pic.twitter.com/uIF1B0H3Ai

“It’s obviously been a really tough week for so many women,” Kabas (who, full disclosure, used to be a Daily Dot staffer) told the Daily Dot. “Not only have we witnessed woman after woman coming forward to say Donald Trump has sexually assaulted them, but then on Thursday one woman brave enough to come forward was told she wasn’t pretty enough to be assaulted by him. I was appalled, and frankly sick of all the negativity flooding my feed. I decided to start #LookAtHer as a way for women to take back the phrase, add some much-needed beauty and positivity to everyone’s timeline, and say that sexual assault knows no bounds.”

Kabas wanted to harness the power of the selfie to let women share their own beauty and confidence, which studies have shown actually works at improving happiness. “I just feel like there aren’t enough reasons to remind ourselves that we’re beautiful, particularly when a major presidential candidate is telling us we’re not,” said Kabas.

There are 26 days until the election, and somehow we suspect Trump will top himself yet again.