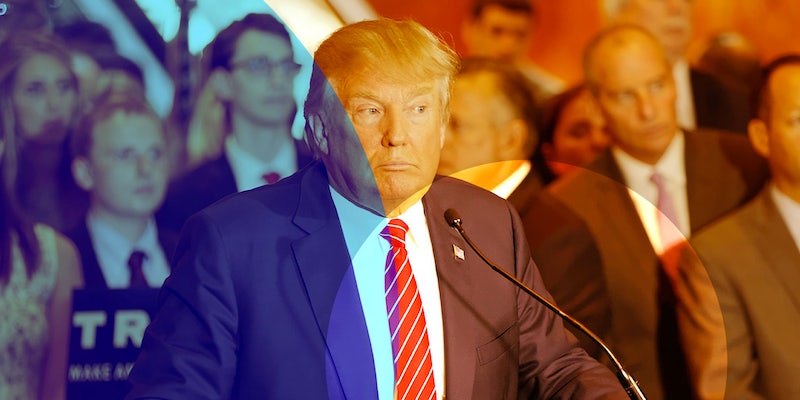 Protesters in California smashed up a police car in the latest violent incident.

The pattern of tension, anger, and violence at Donald Trump‘s presidential campaign rallies and protests continued Thursday night, as an anti-Trump protest in California attended by hundreds of people resulted in 20 arrests, bloodied individuals, and a smashed-up police cruiser.

A @realDonaldTrump supporter just got punched in the face as a scuffle broke out in the street: pic.twitter.com/3h3Fllm3V3

Protesters stood outside the Pacific Amphitheatre in Costa Mesa, Orange County, while Trump gave a campaign speech to thousands of fans in the leadup to the state’s June 7 primary.

The crowd of protesters, some waving Mexican flags, spoke to media and observers to criticize Trump’s remarks on Muslims, Mexicans, and women. Earlier in the day, Trump supporters surrounded peaceful protesters waving a Mexican flag and chanted, “Build that wall! Build that wall!”

Arianna Perez, 19, told the Los Angeles Times that the rowdy protesters were only doing what Trump’s campaign rhetoric had forced them to do.

“We could be peaceful and do things different,” she said, “but if we did, we wouldn’t get our voice heard.”

The police car, from a few minutes ago pic.twitter.com/o2ChcXadT3

These reports of anger and violence are familiar by now, nearly a year into a presidential bid that many dismissed as either unserious or quixotic when the New York businessman declared his candidacy in June 2015.

While Trump has insisted that there has been “no violence” at his events, history shows that both his supporters and his detractors have engaged in violent acts.

In December 2015, a Trump supporter reportedly said “light the motherfucker on fire” in response to a nearby protester. Others yelled “Shoot him!” and “Kick his ass!”

The candidate himself has appealed to and encouraged anger and violence against protesters during campaign events, including asking supporters to “knock the crap out of” protesters in their midst.

In March, Trump cancelled a speech in Chicago when thousands of protesters—several of whom reportedly had plans to “rush the stage”—revealed themselves in the waiting crowd. In the tense environment of the University of Chicago’s UIC Pavilion arena, isolated fights broke out, at least four people were injured, and police arrested five people.

Over the course of the last year, the list of angry outbursts and incidents of physical violence has been growing.

In September 2015, Trump supporters tore up protesters’ signs at a rally. Trump security guards punched a Hispanic protester. When he learned that two men who claimed to be inspired by his message had beaten up a Hispanic man in Boston in August 2015, Trump said that his supporters were “passionate” people.

Attempts to defuse the situation have met with limited success. Earlier this month, a dance-off between Trump supporters and protesters captured the attention of nearby cameras—briefly. But moments later, things got physical, fights broke out between the factions as well as police, and armored riot officers arrested three people.

Trump’s recent victories in the Republican presidential primary put him on a favorable path to the party’s nomination. With six months left in the campaign, there is no reason to believe that the exceptional anger and tension that Trump has inspired will subside.