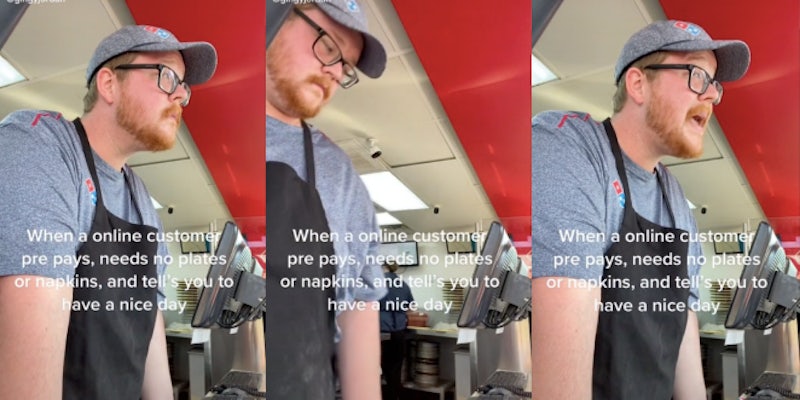 'As a former Dominos worker, stop being lazy bro.'

A Domino’s Pizza employee in Arizona is lauding customers who are easygoing and have simple orders, but his TikTok is attracting quite a bit of criticism.

The video by TikToker Jordan Spoerl (@gingyjordan) features the creator at his job at Domino’s Pizza. As of this writing, the video amassed more than 30,000 views.

Jordan, the store’s general manager, is standing at the cashier’s register and looks up at an imaginary customer as audio that asks “Do you need head?” plays.

The text overlay on the video explains his enthusiasm for the unseen customer. It reads: “When a online customer pre pays, needs no plates or napkins, and tell’s you to have a nice day.”

“Are you a saint?” Jordan asks in the caption.

Many viewers criticized Jordan, and Domino’s workers in general. They are arguing that the workers are too “lazy” to complete what they believe are basic tasks.

“As a former Dominos worker, stop being lazy bro,” one user said.

“Bro gatekeeping the napkins and plates,” a second said.

“Dominos workers mad when thy have to do more than grab and hand u one box,” a third user said, but Jordan clarified, “? No one’s mad.”

When another user asked, “How hard is it to grab some plates and napkins?” Jordan explained that his job is “Not hard at all! It’s the ease of the transaction” that prompted him to call out the order.

While some viewers decided to call out the laziness of Domino’s employees, many others took a more sympathetic and understanding approach.

One user pushed back against those calling Domino’s workers lazy, saying, “they’re just emphasizing how nice it is to get those simple orders sometimes…yall need to chill.”

“No napkins, no plates, no sodas, order is paid for before I get there, and I leave a tip. That’s me every time,” another user claimed, to which Jordan responded jokingly, “Not the hero we deserve, but the hero we need.”

The Daily Dot reached out to Jordan via Instagram direct message.