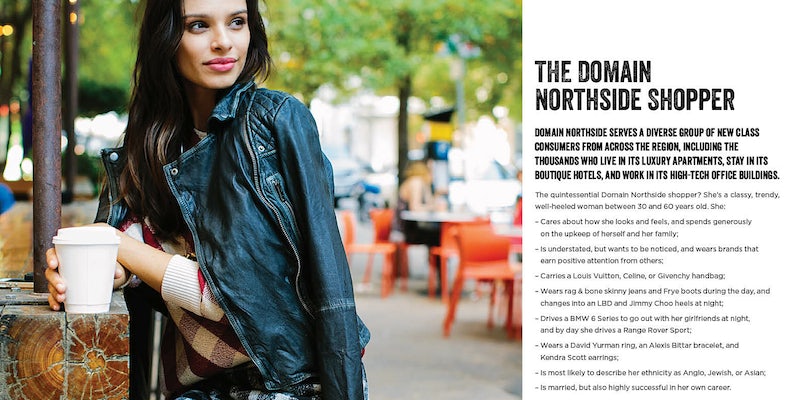 The Domain Northside has some curious thoughts about who it wants shopping there.

The Domain Northside, an upscale mixed-use development in Austin, Texas, has apologized for a tone-deaf brochure that describes its ideal shopper as an image-conscious “Anglo, Jewish, or Asian” woman. The flier went viral on Reddit this week.

The copy also describes its “quintessential” shopper as a woman who “Carries a Louis Vuitton, Celine, or Givenchy handbag” and “Drives a BMW 6 Series to go out with her girlfriends at night, and by day she drives a Range Rover Sport.” She is “married, but also highly successful in her own career.”

Found in The Domain, WTF from Austin

A statement was released on Wednesday addressing the brochure, which is allegedly from 2017 and is “no longer in use.” It has been removed from the Domain Northside website as well:

At Domain Northside, we are proud to serve the residents of the Austin community and sincerely apologize for the insensitive and inappropriate language used in a document, which has since been removed from circulation and is no longer in use. These words do not reflect our values, and we remain dedicated to promoting diversity and inclusion. We will ensure that future efforts reflect the values of the community in which we live and work.

Still, many commenters cited this as an example of the kind of lifestyle marketing that has made Austin residents feel unwelcome, as tech money and luxury development has collided and changed the landscape. As cited by CultureMap Austin, the Facebook group Defend Our Hoodz posted the brochure “not just to stir internet outrage,” but to push back against these types of luxury developments, which are being planned for other areas of Austin.

Someone dug up the original document that @DomainNORTHSIDE created about their 'quintessential shopper' a 'well-heeled woman in her 30s to 60s who describes self as 'Anglo, Jewish, or Asian'.https://t.co/a9JSd1m5fk pic.twitter.com/bDeR4VaVqV

Others, however, defended it as the kind of targeted marketing businesses must do to reach consumers, as well as other businesses.