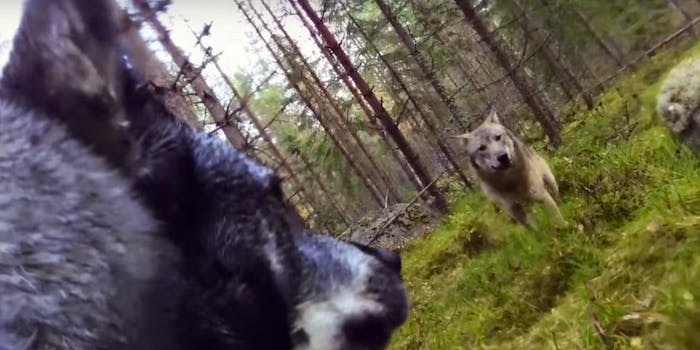 Animals have captured some truly magnificent things with GoPros. But this video is truly terrifying.

A Swedish elkhound outfitted with a GoPro and its owner were moose hunting in a Swedish forest, when the dog came upon a wolf. You can see the moment the dog notices it, peering out from behind a tree. At first there’s some tense curiosity, but then a second wolf shows up.

Moose-hunting season in Sweden started in early October, and the dog’s owner, Tommy Berglund, told Swedish hunting magazine Svensk Jakt that he thought his dog, Klara, had initially come in contact with a moose. When he found her, she was bleeding and could not get up. It was only after he viewed the GoPro footage that he saw the extent of the attack.

Thankfully, Berglund was able to get Klara to a vet soon after the attack, where doctors treated roughly 15-20 wounds. She’s stabilized now, and is recovering, albeit slowly.