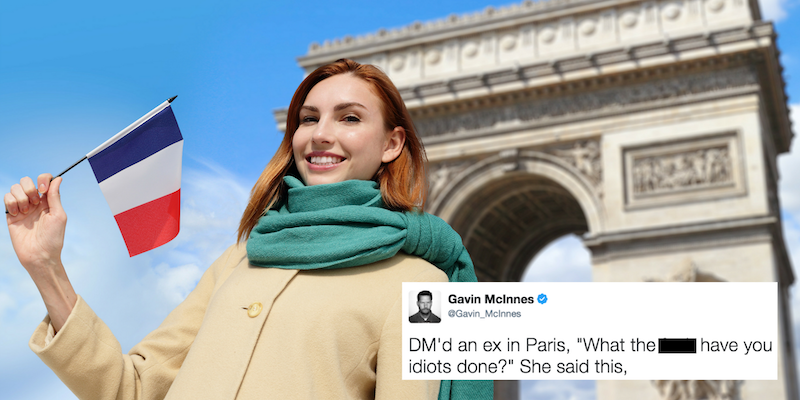 Alt-right bro tries to shame an ex over French election, loses as badly as Le Pen

His French ex definitely hates him, for one...

Nine out of 10 times, contacting an estranged ex-partner is an action better left unexecuted. That ratio bumps up to 10 out of 10 times when the content of that email, text, or Twitter direct message includes the phrase, “What the hell have you idiots done?”

A bad idea, absolutely. But it sure as hell makes for great Twitter entertainment.

Following the French landslide election of independent centrist Emmanuel Macron over right-wing populist Marine Le Pen for president, Gavin McInnes, Vice co-founder and far-right personality of the Gavin McInnes Show on Compound Media, slung that very message to his Parisian ex in an attempt to air his grievances for the loss of the far-right.

Though it could be assumed McInnes claimed his message was sent via Twitter DM, the ex’s response very clearly looks to have come in the form of an iPhone text message conversation, and reads, ” … hatred. You must feel very alienated from a lot of people in your past. I’m at a loss as to how I was ever with someone like you. It’s something I’m ashamed of. Your family and wife must be proud. Vive la france.”

Yeah, sounds like McInnes’s ex was none too pleased to hear from him, let alone be insulted by his radically right ideals.

And while she might not have been too happy to hear from the Trump-praising, feminism-hating, ex-Vice editor (he left the company in 2008), the internet was glad to mine the riches of her misfortune, turning McInnes’s Very Gross tweet on its head into a meme of its own.

Just following McInnes’s original tweet, or even just part of the tweet, you too can make your Parisian ex say anything ridiculous, anything at all! Because we all have exes in Paris who hate our current stances on politics who are stereotypically French.

DM'd an ex in Paris, "What the fuck have you idiots done?" She said this, pic.twitter.com/R5gQfnLAdT

Dm'd an ex in Paris. He said this: "Oeuf means egg. Chapeau means hat. It's like those French have a different word for everything."

dm'd an ex in Paris this was her response pic.twitter.com/l7cbzghPFw

Contacted an ex in Paris, asked "what have you idiots done?" Her husband responded with this pic.twitter.com/MmJEvlnQfE

messaged my ex in paris. here's what she replied "i missed your how you say le big penise. please to come back and put it in moi"

Please, all internet trolls, take this as a lesson to stop contacting your long lost ex-partners and reminding them of the regret they have in dating you. And no matter the circumstances, definitely do not post record of said contact to Twitter. You will be, undoubtedly, how you say, le pwned.