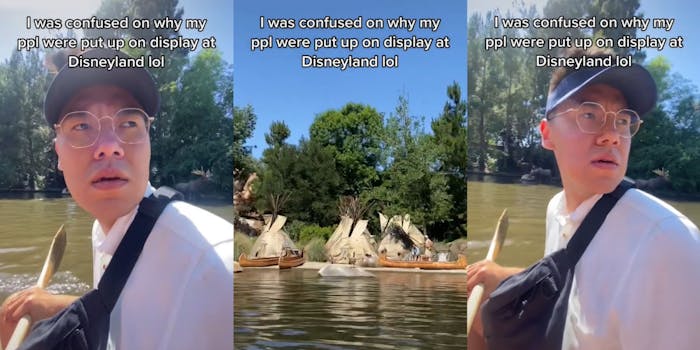 'I remember a time when Disney called them savages.'

Davy Crockett’s Explorer Canoes is among Disneyland’s seasonal rides, a canoe that can hold 20 people that travels around Pirate’s Lair on Tom Sawyer Island. It has a variety of sights that passengers can view, but after a recent visit, one TikToker took issue with Disneyland’s Native American display.

TikToker John Barbachano filmed the ride from one of the canoes as it passed a display across the water that included several teepees, canoes, and animatronics of Native Americans. The camera zooms in to get a closer look at the display before the camera turn toward Barbachano.

“I was confused on why my ppl were put up on display at Disneyland lol,” Barbachano wrote.

One commenter suggested swapping in a quote from Euphoria, to which Barbachano delivered.

TikToker’s reactions to the display varied. Some commenters joked about how Barbachano should’ve tried going over to the teepees, others were upset by the appropriation, and some did not take offense at all.

The display, according to Disneyland’s official website, is described as “an idyllic Native American village” and is among the locations on the ride that “sharp-eyed explores can spot.”

Disneyland’s history of using Native American imagery for its attractions goes back decades, and as one person pointed out, it used to be even more offensive toward Native Americans. In March, Disney said that it regretted a live performance from a visiting cheer group that included depictions of racist stereotypes against Native Americans in their routine.

“I remember a time when Disney called them savages attacking the homestead,” one user alleges.

The Daily Dot reached out to Barbachano via TikTok and Disneyland via email for comment on this story.