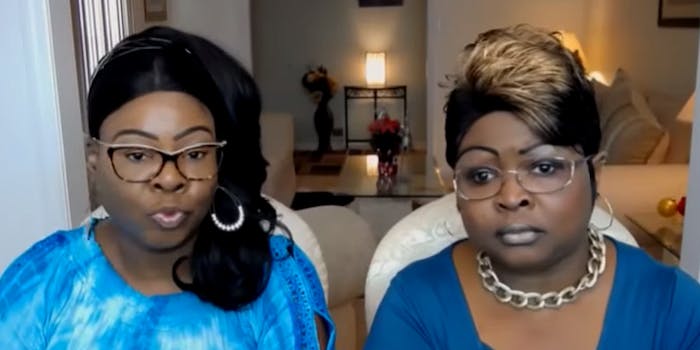 They clearly won't be seeing his next movie.

Academy Award-winning filmmaker Spike Lee sounded off this week on President Donald Trump while at the Cannes film festival, where he was showing his latest movie, BlacKkKlansman. This caused a pair of Trump’s most highly visible Black supporters to strike back, using a very old line of attack in the process.

The supporters in question are Diamond and Silk, real names Lynnette Hardaway and Rochelle Richardson. The pair became social media stars during the 2016 election by way of their Facebook videos, in which they regularly professed support for Trump’s candidacy and attacked various liberal and left-wing politicians and causes.

They were even summoned to Capitol Hill to address their heavily contested claim that their content was censored by Facebook, although in the process they could conceivably have perjured themselves by denying being paid by the Trump campaign.

In an interview with Jesse Watters of Fox News, Diamond and Silk referred to Lee as “little,” and pulled out an inflammatory term that’s often used to attack black Democrats: the “Democratic plantation.”

“Little Spike Lee is just upset because he can’t get the majority of his movies to spike to the top. So what he’s trying [is] to politicize this movie. Throwing daggers at a sitting president and calling a sitting president nasty names is not going to get people to the polls,” Diamond said. “Now we’re not going to watch no movie about no KKK, what he should have done was make a movie about how the Democratic Party, the party that he loves, created the KKK to intimidate, manipulate, and dominate.”

Spike Lee slammed President Donald Trump at the Cannes Film Festival after the premiere of his new film, "BlacKkKlansman" and talked about why he used footage of the crash that killed Heather Heyer. https://t.co/V7YfXrF8Ge pic.twitter.com/RX0Wt4mAZf

Earlier this week, Lee excoriated Trump for failing to denounce neo-Nazis and racists in the aftermath of the deadly Charlottesville white supremacist rally.

Notably, Lee also said he received permission to use the video of anti-racist demonstrator Heather Heyer’s death from her mother, Susan Bro. As such, the footage of Heyer being killed by a vehicular attack during the Charlottesville protests will be included in the film.

“I was not going to put that murder scene in the film without her blessing,” Lee said, according to CBS News. “Mrs. Bro said, ‘Spike, I give you permission to put that in.’ Once I got permission, I said, ‘Fuck everybody else, that motherfucking scene is staying in the motherfucking movie.’ ‘Cause that was a murder.”