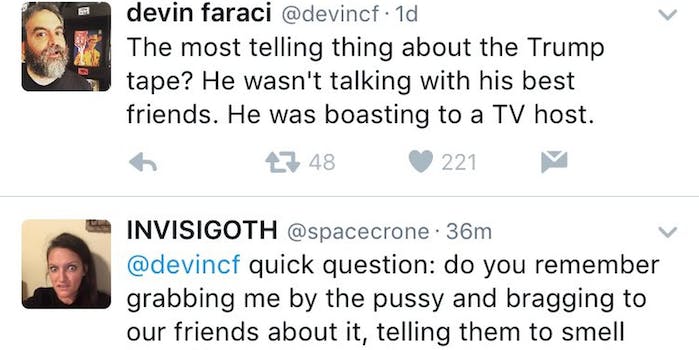 He says he doesn't remember doing it—but has now 'stepped down' from Birth.Movies.Death.

Behind every performatively woke man is a dark past he’s desperately trying to make sure you don’t see. Such appears to be the case with Devin Faraci, film critic at Birth.Movies.Death.—and a man who’s garnered a reputation for being a “good” guy (if not a little holier-than-thou and obnoxious).

But after tweeting his outrage over Trump’s “grab them by the pussy” comments, Twitter user @spacecrone tweeted at him, accusing him of doing exactly that.

I've been forced to think about you a lot since these trump tapes came out.

When you're woke online but you have a past… pic.twitter.com/vEDQgz0cqx

@spacecrone spoke more about her accusation on her timeline, saying he stuck his hand down her pants and told mutual friends he had “fingerbanged” her. “I’ve avoided making that public for over a decade but I guess my rage at trump has uncasked the Gorgon in me,” she wrote. She also said she had given him opportunities to apologize before, and he never did.

Faraci claimed on Twitter that he had no memory of the event, and asked for forgiveness (though he did not technically offer an apology). He hasn’t addressed the accusation again online, though many others are supporting @spacecrone, and saying he’s been a creep for a long time.

Devin Faraci has been outed so many damn times. How long until people actually get it? He's not an ally. https://t.co/ZvMzO6PLAb

Devin Faraci sexually assaults women, tries to goad people into suicide & cyber-stalks basically everyone but sure, fandom is the problem.

But that'd suggest Devin Faraci actually values women's voices and value feminism as something more than making him look better.

The democratization of language has made it incredibly easy for anyone to appear liberal and open-minded. Call enough things “problematic,” ask for men to “do better,” or mention “rape culture” or “gender is a construct,” and you’ve strung together enough buzzwords you don’t have to prove you’ve got the beliefs to back them up. To really be woke, you have to learn to separate the performance from the person. And that’s a lesson marginalized people have had to learn far too often.

Update Oct. 11, 10:51am CT: Faraci has “stepped down” as editor-in-chief from Birth.Movies.Death., according to a note on the site. It reads: “I’m here to assure you that the site and magazine will continue, with a team of smart, passionate writers dedicated to bringing you the best in pop culture news and conversation today. Devin built this site into something we’re proud to continue and grow in his absence.”

Update Oct. 11, 12:35pm CT: Faraci has also commented: “This weekend allegations were made about my past behavior. Because I take these types of claims seriously I feel my only honorable course of action is to step down from my position as editor-in-chief of Birth.Movies.Death. I will use the coming weeks and months to work on becoming a better person who is, I hope, worthy of the trust and loyalty of my friends and readers.”

Since Faraci’s stepping down, @spacecrone has deleted the tweet, but “not because I’m embarrassed or want to pretend it didn’t happen,” she tweeted, “but because it’s become a focal point for some really vile stuff that I don’t feel is in any way in touch with what actually happened.”

After talking with @timalamo, who was extremely supportive, it sounds like he is genuinely interested in getting help.

I've let them know that I am available to be a part of whatever accountability process is part of Devin's recovery.

Am I happy all of this had to happen? No. But I am really relieved that something constructive seems to have come of this.

I think we could all use this time to reflect on the myriad ways we give people free passes for harmful actions.

And I hope anyone who has gone through something similar might look at this and see that you're not frozen in that moment.

I'm taking down "the tweet," not because i'm embarrassed or want to pretend it didn't happen,