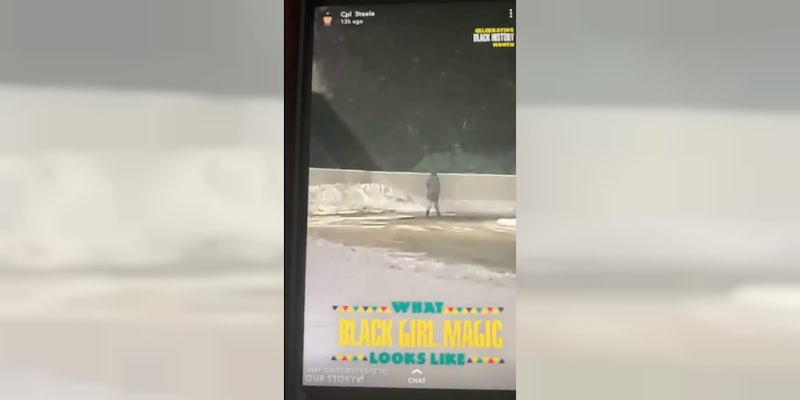 The officer told her 'bye Felicia.'

The Detroit Police Department is investigating a racist Snapchat video posted by one of its own, Officer Gary Steele, the Huffington Post reports.

The video was shot Tuesday after Steele seized a vehicle owned by 23-year-old Ariel Moore, who was pulled over for driving with expired registration. Steele told Moore, who is Black, to walk home during a record-breaking cold snap that has left large portions of the country with temperatures well below freezing.

The officer filmed Moore as she began the block-long journey, calling it the “walk of shame” and decorating the video with stickers that read “What Black girl magic looks like” and “celebrating Black History Month.” Before ending the video, he repeated the meme “Bye, Felicia.“

Department officials later confirmed Steele posted the video, and he has been reassigned while the investigation is underway. His unnamed partner remains under investigation as well.

Moore and her family decried the video as racist. “What they put on there, that’s racist,” her mother, Monique Mobley, told WXYZ. Detroit Police Chief James Craig agreed with their sentiment. “I am angry. I’m angry because this was a racially insensitive post,” he told the Metro Times.

Upon review, body-camera footage did reveal that Steele and his partner offered Moore a ride home that night. Regardless, Craig called the Snapchat video a “bad decision” and noted the dangerous conditions in which Moore walked home.

This wasn’t Steele’s first incident, either. Back in 2008, he faced assault charges after a fight with his ex-girlfriend that resulted in gunfire, WXYZ reported. He received probation after taking a misdemeanor plea deal and was able to remain on the force.