Could deskcamping be the future for freelancers?

Sartre said, “Hell is other people,” and he hadn’t even heard of Deskcamping, the new freelance office-share arrangement for creatives.

The 20th century’s wise men said that in the future, everybody would work from home. Then the future arrived, and we discovered those wise men were in fact wrong.

Despite sounding very attractive at first, the vast majority of people should not attempt to work from home because the very same technology that enables us to do so—the Internet—is also the most distracting thing ever invented.

After three weeks of working from home, in which I rediscovered some websites I’d probably best not reveal here, I’ve realised that if I’m to get anything done, I need to leave the house every morning.

Last week I signed up to Deskcamping, a new portal that connects freelance workshy types to available desks, to see if I could find somewhere to call my office. Within a few seconds of logging on, it became clear that, in exchange for a table top and an Internet connection, I was going to have to put up with a fair bit of nonsense — which is fine: It would remind me that I’m at work.

“Like a campfire, it’s a place for people to meet and share things,” explains the site’s About page, as though simply exchanging money for a service isn’t enough.

Perhaps most amusing for those aware of the startup industry’s capacity for self-parody, the site’s founder, Nick Couch, claims to have created the company while sitting under a tree in East London while wearing sandals.

“It’s not really about desks at all,” he writes, but “collaboration.” 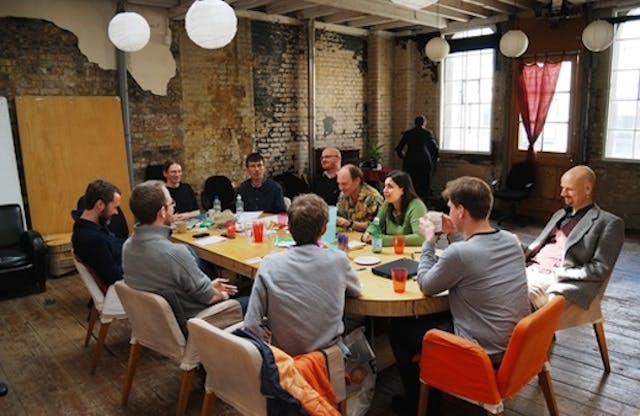 Speaking via email—presumably from indoors—Couch, a freelance designer by trade, said he created the site as “an alternative to working from home or a café.” Since launching in December, the site’s been averaging 20 new signups a day from offices and freelancers in London, New York, and Berlin, with plans for expansion across Europe and North America.

Right now the site takes no commission from listings, although that will change once Deskcamping has become an established name in the “sharing economy” alongside Airbnb and BlaBlaCar, which hook up consumers with apartments and car journeys, respectively.

Other philosophical musings include, “We want Deskcamping to capture the same spirit of real life camping.” We’re also instructed: “Be a sharer, a helper-outer, a home-baking-muffin-maker. Be yourself (but yourself on a good day).”

A survey by employment agency peopleperhour.com estimated that 40 percent of small and medium businesses in London use freelancers in the design and creative fields, a number thatis set to increase with time.

By 2020 it is expected that 40 percent of the entire U.S. workforce won’t have a regular workplace. But right now, it’s a strictly metropolitan-elitist affair.

Some readers may also be surprised to hear that many of the desks advertised on Deskcamping aren’t located in rooms, offices, or buildings. They’re floating around in “spaces” and “hubs,” well-connected and supercharged, linked in and wired up. 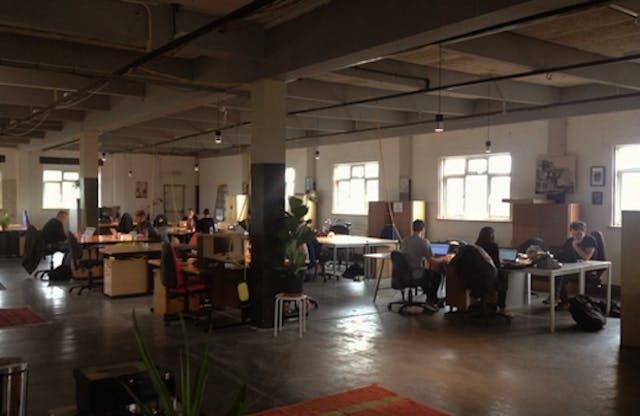 The creative hub-space I linked myself up to was at 90 Main Yard in Hackney Wick, east London, a converted warehouse overlooking the Olympic stadium. I paid £20 for the privilege of working there for one day, which entitled me to a desk, broadband, a retro-futurist chair, and use of the kitchen and toilet facilities. Full members get 24-hour access, a permanent desk, and a locker, but casuals have to be out by 6pm.

“It’s more than just a desk,” said Georgia Patsouraki, the building’s community manager. “We have the breakfast club on Mondays, and on Thursdays we have beers after work and play board games.” 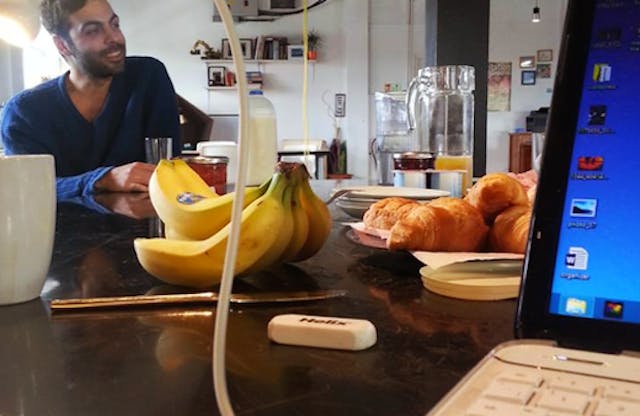 Georgia then showed me a washing line with pieces of coloured card hanging from them, like in primary school. On each card is a photo of all the site’s members—mostly filmmakers, photographers, and designers—which encourages everybody to link up and collaborate.

I sat down to the Monday morning breakfast club; the two other people present totally ignored me. After a cinnamon bagel, I plugged my laptop in on the eight-seater table reserved for hot-deskers.

At 9.45am, a middle-aged man in a checked shirt turned up with a bicycle and sat opposite me on the hot desks. As the stranger plugged his laptop in and the Mac’s welcome tone chimed, I began to wonder if a creative collaboration had been been sparked.

“Good morning,” I said with enthusiasm.

“Morning,” he said, and put on a pair of noise-cancelling headphones.

Later in the day, I had to tape a phone conversation with somebody involved in a minor sex scandal. But there wasn’t enough noise in the office to mask my call, which I was too embarrassed to make within earshot of Georgia, so I retreated outside into the cold and made my call while sitting on a wall in the carpark with a notebook balanced on my knee.

I wondered if Nick Couch would approve.

At 6pm, Georgia tapped me on the shoulder and reminded me politely that it’s time to leave. I hadn’t even noticed the time. 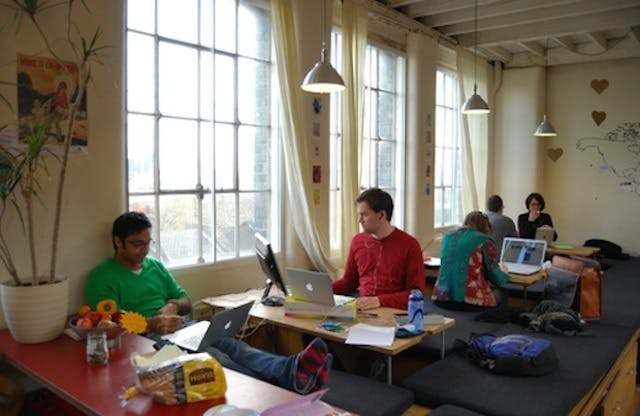 Not only did I feel more productive than if I’d been at home with Frasier on in the background, I’d only gotten up and made coffee once (another procrastination habit), because I didn’t want to come into contact with people who aren’t my friends and don’t even feel like coworkers. We just shared the same floor, roof, and Internet connection for the day.

If that doesn’t sound like work, I don’t know what does.