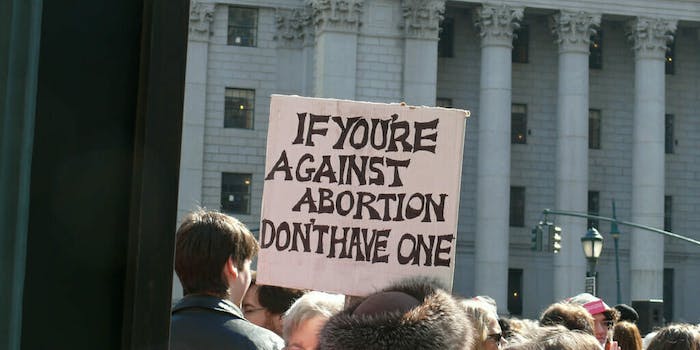 Instead of watering down their core values, Dems need to address voters' actual needs.

There is a pervasive myth among Democrats that candidates have to be willing to compromise on abortion to win in “the heartland.” Sadly, this tired line of thinking extends into the highest ranks of Democratic power, including House Minority Leader Nancy Pelosi.

Pelosi isn’t in the only powerful Democrat to take this position; last year Vermont senator and former presidential candidate Bernie Sanders said, “You just can’t exclude people who disagree with us on one issue,” when he was questioned over stumping with anti-abortion, DNC-backed Heath Mello, who was running for mayor of Omaha, Nebraska.

This line of thinking can be seductive because it absolves Democrats of blame for running bad campaigns. Losses by pro-choice candidates can be explained away over the belief that voters in rural states would never vote for a pro-choice candidate. In the end, though, Mello lost to the Republican incumbent mayor, even though Omaha went blue for Hillary Clinton in the 2016 election.

Ultimately, all this reasoning does is get at the heart of Democrats’ recent failures: Rather than running “compromise” (and compromised) candidates who offer a watered-down version of the Republican agenda, why not run bold candidates with stances that appeal to specific communities within a broad coalition? Instead of talking about what Democrats can’t do if they want to win, why isn’t the discussion how to better serve rural communities?

The sad answer is that many Democrats don’t want to. Offering concrete policies to address material needs like universal healthcare and a $15 minimum wage would put them at odds with their donors. The post-Citizens United Democratic Congressional Campaign Committee has become obsessed with building a donor and lobbyist-funded war chest. But, if Democrats want to win, they are going to have to leave some of those donors behind. Simply compromising on so-called “culture war” issues isn’t going to give them the votes they need. The reality is that not only is compromising on women’s reproductive rights morally wrong and incredibly unpopular (70 percent of Americans support Roe v. Wade), it is unclear that it actually wins any votes.

While the centrist media has flooded the internet with hot takes applauding “pragmatic centrists” who have triumphed in recent special elections, if you look closer at these races, it is just as reasonable to argue that it’s the few progressive policies these candidates championed that drove voter turnout rather than their compromise politics.

Many view the success of Rep. Conor Lamb in western Pennsylvania as a pragmatic success story. He was soft on abortion, always careful to tell people that he himself was pro-life, and he was weak on gun control. And he won a narrow victory. In the New York Times summary of his win, the paper said, “He echoed traditional Democratic themes about union rights and economic fairness, but took a more conservative position on the hot-button issue of guns.” Much of the ink spilled after his election has focused on the last part of that sentence and not the first.

Any analysis of Lamb’s victory should also talk about the strong union support that put him over the top. If you ask Pennsylvanians why Lamb won, locals will talk about his support for the unions first, and likely point out that Western Pennsylvania is historically and strongly pro-labor. Lamb also won narrowly, and it is fair to ask if he would have won by a larger margin if he had, say, come out in favor of a $15 minimum wage. When pressed on this issue, Lamb said that $15 “sounds high based on what I’ve been told by man small-business owners in our area.”

If you look at Hillary Clinton’s failures in rural America during the 2016 election, there are plenty of other issues like raising the national minimum wage that could galvanize voters that were left underutilized. Opioid addiction has ravaged much of rural America. While Clinton prepared an expansive proposal around the issue, you could have watched all the debates and not heard much about it. Coal miners became a symbol of job retraining, which is going to affect a variety of sectors in the coming years, from truck drivers to factory workers. These workers who see their way of life coming to an end felt dismissed as “deplorable” and were told to “learn to code.”

Democrats’ complete disconnect with rural America during that election has been infamously immortalized with Sen. Chuck Schumer’s summer 2016 prediction that “for every blue-collar Democrat we lose in western Pennsylvania, we will pick up two moderate Republicans in the suburbs in Philadelphia, and you can repeat that in Ohio and Illinois and Wisconsin.”

As we well know, that is not what happened. Democrats are indeed very out of touch with small-town America—and sacrificing women’s rights isn’t going to fix that.

People’s Action, a countrywide progressive organization, recently held a summit bringing together activists from 10 states to develop a strategy for revitalizing the left in America’s heartland. In a recent article in the Nation, Robert L. Borosage described the priorities the groups wants to address: “Rural and small-town America have taken some of the hardest hits: jobs lost, plants closed, water fouled, family farms crushed, the relentless spread of the afflictions of despair—divorce, suicide, depression, addiction.”

This week, we took action in Iowa, Nevada, Ohio, & D.C. We brought people together to take down corporations funding climate destruction and lift up Native candidates & rural activists.

We need your help to continue. Vote for us to receive funding NOW: https://t.co/wsM08ITMfR pic.twitter.com/1hMcmDkRkB

Following its conference, People’s Action released a comprehensive 60-page report outlining a strategy for rural America and highlighting issues that Democrats could capitalize on to regain the trust of rural voters. If you search the document, the word “abortion” isn’t listed once. Some of the issues the organization brought up include universal healthcare, clean water, the opioid crisis, college for all, and sustainable infrastructure.

Considering that none of these issues have been national talking points for Democratic candidates, how can we immediately assume that compromising on reproductive justice is the solution? As the old saying goes, Democrats have tried nothing and they are all out of ideas.

Then there is the question of whether or not compromising on abortion can even win votes. Evangelicals are the largest and most militant block in the pro-life movement. Evangelicals also went 85 percent for Donald Trump. While many Evangelicals engaged in furious hand-wringing over Trump’s shortcomings, they still voted overwhelmingly for Trump, despite his utter ignorance on issues of faith.

For Evangelicals, abortion is a cornerstone issue, but it is just one of a batch of policy positions that are incompatible with a progressive movement. Evangelicals support war in the Middle East. Evangelicals tend not to worry about the environment; a group of 48 evangelical pastors recently penned a letter supporting troubled Environmental Protection Agency head Scott Pruitt, who is himself a former evangelical deacon. Evangelicals oppose equal pay. Most evangelicals believe that “the police are doing their jobs well.” Even if Democrats took the Republican position on abortion, Evangelicals would still vote Republican. As Clemson University sociologist Andrew Whitehead told the Washington Post, “The view is that God can use anybody as long as they’re promoting Christian nationalist or ideals or values. It’s all about a quest for power and what serves the purpose in the political moment.” These votes aren’t going anywhere.

Last December, Doug Jones in Alabam won a Senate seat for Democrats. Why did Doug Jones win? Did he sway Evangelicals disgusted with Roy Moore’s alleged predatory abuse? No. Evangelicals voted 80 percent for Moore. Jones won because people of color saw a threat to their rights and material conditions because of Moore’s long and well-documented history of racism, and they turned out despite the fact that Jones is a fairly wishy-washy candidate. Again, Jones won a narrow victory, and again, we are left to wonder how much better Jones would have done if, say, he had championed criminal justice reform and actually courted the voting bloc that got him elected. (And yet, even Jones didn’t feel he had to water-down his pro-choice views to please voters in the Deep South.)

There is only one winning path forward for Democrats, and yes, it involves litmus tests. Litmus tests build trust and support. Litmus tests motivate the base to knock on doors. Litmus tests help the electorate differentiate between one suit and another. Failure comes from running compromise candidates that the average voter can’t see as markedly different from their Republican opponent. Democrats can only win if they embrace the needs of their base and motivate voter turnout. That means holding firmly to the policy positions that their base holds dear—including the rights of women.