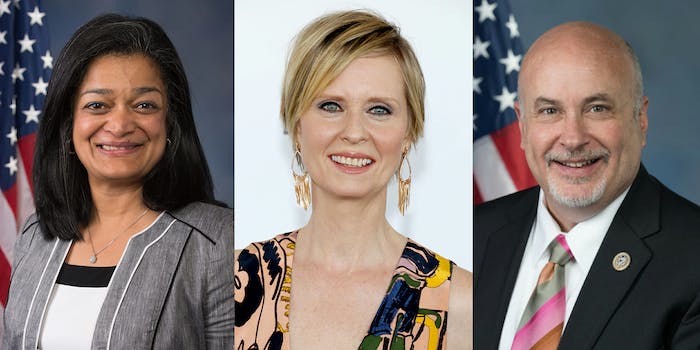 These are the candidates who are committed to abolishing ICE

Dems are recognizing they need to take a stand against the anti-immigration agency.

While many progressive activists and organizations have joined the movement to #AbolishICE in recent weeks—especially in light of the family separation atrocities at the border—politicians have been slow to catch up with the popular energy that has led to massive protests and ongoing blockades of Immigration and Customs Enforcement (ICE) facilities. When the question has been posed on a national stage, some of the country’s most prominent progressive figures have stopped short of vowing to get rid of the agency that has trounced on human rights.

Sen. Bernie Sanders (I-Vt.) recently opted not to call for the abolition of ICE during an appearance on CNN’s State of the Union with Jake Tapper. Sen. Kamala Harris (D-Calif.) has said it is time to “critically reexamine ICE and its role,” but also stopped short of calling for an end to the agency. The California senator went so far to defend ICE on MSNBC in March.

Though the majority of Democrats have taken similar positions to Harris and Sanders—or, like Sen. Joe Manchin (D-W. Va.) and Rep. Adam Schiff (D-Calif.), have even expressed more conservative positions—some left-wing Democrats have called for an end to ICE, just in time for the midterm elections.

Incumbents up for re-election this year

On Monday, Rep. Mark Pocan (D-Wis.), who represents Wisconsin’s second district, became the latest member of Congress to call for the abolition of ICE. Following a recent trip to the southern border, Pocan, who called the Trump administration “white nationalists,” said he is introducing a bill that would end the agency.

.@realDonaldTrump & his team of white nationalists, including Stephen Miller, have so misused @ICEgov that the agency can no longer accomplish its goals effectively. I’m introducing a bill to #AbolishICE & crack down on the agency’s blanket directive to target & round up people. pic.twitter.com/xhHsOHCdNH

“I’m introducing legislation that would abolish ICE and crack down on the agency’s blanket directive to target and round up individuals and families,” Pocan said in a statement.  “The heartless actions of this abused agency do not represent the values of our nation and the U.S. must develop a more humane immigration system, one that treats every person with dignity and respect.”

“I would love to see ICE go,” Rep. Pramila Jayapal told Amy Goodman on Democracy Now last Tuesday. Jayapal, a congressional freshman, was the first incumbent to call for the abolition of ICE.

In recent weeks, she has made several trips to federal detention centers, including meeting with over 170 women immigrant migrant women being held near Seattle. Following her trip, she released a statement saying, “The mothers could not stop crying when they spoke about their children. Young girls and boys who were taken from them with no chance to say goodbye and no plan for reunification.”

What I heard from the women being held at the federal detention facility today was saddening and disturbing. They cried so much.

Every asylum-seeker should be immediately released, reunited with their children and connected to legal services. Anything less is cruel and barbaric. pic.twitter.com/29dZrCX3Ug

Immigration is just one of a number of key progressive issues for Jayapal, who has quickly built a reputation as one of the most progressive members of Congress, supporting single payer, $15 minimum wage and free public college.

Over the weekend, Rep. Jim McGovern called for an end to ICE. At a town hall in his district, McGovern said, “ICE has turned into something that is not about enforcing immigration laws. It has turned into something that is dedicated to ripping families apart. The time has come to, as I’ve said, to re-evaluate what we have in place, to get rid of ICE.”

A member of the Congressional Progressive Caucus, McGovern has spent is career focusing on human rights. He has stood up against human rights violations in Tibet, Russia, Bahrain, El Salvador, and a number of other countries. Now he is using his vast human rights expertise in his own.

McGovern was followed on Sunday by Rep. Earl Blumenauer, who took to Medium to express his support for the abolition of ICE. He concluded the short piece in which he highlighted his “no” vote on ICE in 2002 with, “To regain the trust of the American people, it’s time we abolish ICE.”

Blumenauer, who represents most of Portland, has had a career distinguished by a focus on the environment (he is the founder of the Congressional Bicycle Caucus), farming, and healthcare, but has become outspoken on immigration in the aftermath of the Trump administration’s recent policies.

Leftist writer and founder of Data for Progress Sean McElwee has been keeping track of congressional candidates who support the abolition of ICE as well as the proliferation of support for the position on social media. As of Monday, his list neared two dozen names, including some of the most prominent progressive candidates in the country.

Last night, Alexandria Ocasio-Cortez did what many thought was impossible: She defeated longtime incumbent Rep. Joe Crowley (D-N.Y.)—and on a very progressive platform.

In recent weeks, the Bronx-born activist, organizer, and member of the Democratic Socialists of America had gained significant steam against the fourth-ranked Democrat in the House. She pushed against Wall Street, which Crowley has ties to, and garnered the endorsements of the Black Lives Caucus and MoveOn. She also was very vocal about abolishing ICE.

She told the Nation, “After a long and protracted history of sexual assault and uninvestigated deaths in ICE’s detention facilities, as well as the corrosive impact ICE has had on our schools, courts, and communities, it’s time to reset course.” She also said she wants “a truth and reconciliation process for victims of any potential sexual assault, neglect, and misconduct discovered as a result.”

If elected (she will face Republican Anthony Pappas in November in a very blue section of the Bronx and Queens), Ocasio-Cortez might be the most progressive member of Congress. Her policy proposals include Medicaid-for-all, a federal jobs guarantee, and limiting luxury real estate development. As the crisis at the border developed, Ocasio-Cortez suspended campaigning to head to Tornillo, Texas, to see a child detention center for herself.

The child detention camps are here – I confronted the border officers myself.

Using their names, I told them exactly what they are responsible for.

One of them made eye contact with me.
I spoke directly to him.
I saw his sense of guilt.
We can dismantle this.#AbolishICE pic.twitter.com/QLyc9MAnkt

Widely known by his nickname, “Ironstache,” Randy Bryce has catapulted onto the national stage with a blend of working-class bonafides (he’s a union ironworker) and progressive policies that he thinks can win in Paul Ryan’s district. Bryce has been outspoken on issues like Medicare for All and union protections during his campaign, and he has added the abolition of ICE to his list of priorities.

Bryce has officially been on board with working to abolish ICE since April, when he tweeted, “ICE has abused their power to deport so many women, children, and asylum seekers with no criminal record to countries where their lives are at risk. ICE didn’t exist until 15 years ago. There’s no reason for them to exist now.”

ICE has abused their power to deport so many women, children, and asylum seekers with no criminal record to countries where their lives are at risk.

ICE didn't exist until 15 years ago. There's no reason for them to exist now.

Following the tweet, Bryce gave a substantive interview to Slate in which he discussed his position in depth:

“When agencies abuse their power that way, when they stray so far from their mission, and act in such contradiction with our shared American values, it’s fair to question whether that agency should exist at all. I am confident that other parts of the federal government could effectively carry out the functions of immigration and customs enforcement that are necessary, as they did 15 years ago before ICE was created.”

Abdul El-Sayed is gaining popularity as a progressive candidate for governor in Michigan. If elected, El-Sayed would be the first Muslim governor in American history. He told McElwee in an article for the Nation, he “will not waste a dime of state taxpayer money to enforce laws that would tear apart families—and tear apart our economy.”

He followed this up with a scathing indictment of ICE on Twitter last week.

To those who are bending over backwards to justify ICE’s tearing children from their parents:

Those children will write the history that will condemn you as small, inhumane sycophants who put your proximity to power over your moral and patriotic duty to stand against injustice.

The former Sex and the City star and current challenger in the New York governor’s race has become a progressive icon in recent months, as she has zealously challenged embattled Democratic Gov. Andrew Cuomo.

Last Friday, Cynthia Nixon gave an impassioned speech in which she called ICE a “terrorist organization” and said, “I think we need to abolish ICE. That seems really clear. They have strayed so far from the interests of the American people and the interests of humanity.”

After Sen. Sanders declined to call for the abolition of ICE over the weekend, a number of progressives and leftists online were quick to label themselves “Nixon Bros” and “Cynthia Bros” going forward.

While the call to abolish ICE will certainly grow in the coming days, it will be important to see how candidates who were early adopters in the call to abolish ICE fair in remaining primaries and in November’s general election. If candidates who support ending ICE continue to win like Ocasio-Cortez did, then #AbolishICE could become a Democratic litmus test. However, if these candidates are defeated while the Democrats who tolerate (or even support) ICE win, it will be more difficult to translate grassroots energy into policy success once Democrats regain power in Washington.