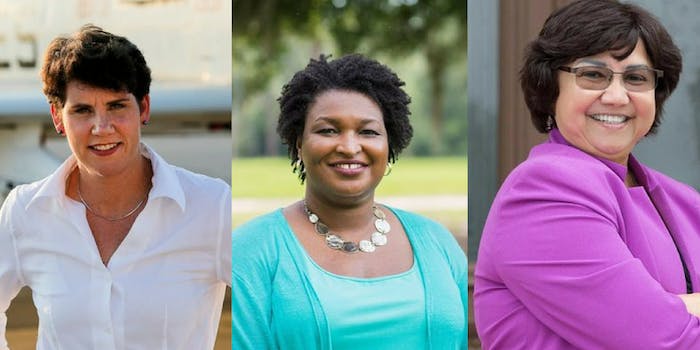 Women are leading the “blue wave” to November’s election, and Tuesday’s results from primaries and runoff elections across the South are just the beginning.

In Georgia, former state House Democratic leader Stacey Abrams, one of the women who gave the Daily Dot’s women hope for 2018, made history by becoming the country’s first Black woman to ever be nominated for governor by a major political party. Abrams is the first woman to lead either party in the Georgia General Assembly and the first Black leader of the House.

Abrams beat out former state Rep. Stacey Evans, ending a campaign-long narrative of the “battle of the ‘Staceys.'” The state election echoed the nationwide Democratic struggle to contest which strategies would work to guarantee a Democratic governor come November: Mobilizing untouched Black voters or appealing to white moderates who voted for President Donald Trump?

No Democrat has won a major Georgia statewide race since 2006, and the last Democrat governor was elected in 1998, according to CNN. However, polls from last week showed that Abrams was trailing one of her Republican opponents, Lt. Gov. Casey Cagle, by five points. Cagle will now face a runoff against Georgia Secretary of State Brian Kemp.

McBath’s son Jordan Davis was a victim of gun violence, murdered at 17 at a Florida gas station by a 45-year-old white man in 2012. Since then, McBath cofounded the Mothers of the Movement, became a faith and outreach leader for Everytown for Gun Safety, and helped plan the March for Our Lives. McBath was amid a campaign for state legislature, but after the Parkland, Florida, shooting, she decided to run for Congress instead.

You don't stop being a mother when you lose your child. For 17 years I was blessed to share special occasions and life's milestones with my son, Jordan. I know he's guiding me today; I will always honor his memory by advocating to stop senseless #gunviolence#GA06 #EnoughIsEnough pic.twitter.com/I6N8INB41v

White, who has espoused anti-abortion beliefs and faced criticism of his border protection technology company, campaigned for reproductive justice and said he would divest from the company if he won the nomination. Although Valdez’s chances of being elected governor in the deeply red state of Texas may be slim, she would be the first openly gay governor if elected.

Thank you, Texas! Tonight is for you! pic.twitter.com/onGtnEU53s

Texas women secured two nominations for the House. Former Air Force intelligence officer Gina Ortiz Jones won her runoff in Texas’ District 23, which spans a majority of the Texas-Mexico border. If Ortiz Jones defeats incumbent Republican Rep. Will Hurd, she will be the first Filipina-American to serve in Congress.

The next round of primary elections for Alabama, California, Iowa, Mississippi, Montana, New Jersey, New Mexico, and South Dakota is on June 5.