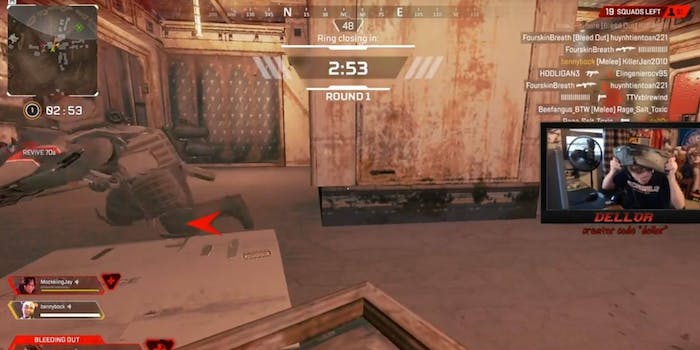 A Twitch user with more than 500,000 subscribers said he was banned by Twitch for harming himself during a live stream. Soon afterward, Dellor, incredulous with Twitch’s decision, posted a suicide message on Twitter.

By Tuesday night, multiple messages from people in his Discord chat said Dellor was in the hospital and receiving help after his suicide threat. One person wrote, Dellor “is doing fine and will be OK. He’ll be back soon.”

The issue began Tuesday. Dellor broke a keyboard over his head during a live stream while he was gaming, and Twitch apparently believed that to be an act of self-harm, a rules violation of the site’s terms of service.

A visit to his Twitch page confirmed he’s been banned with a message on the site reading, “Sorry. Unless you’ve got a time machine, that content is unavailable.” That is the typical message seen when a user is suspended.

Dellor claimed he bought that keyboard because of its fragility.

“I’ve broken hundreds of them and have never even scratched myself,” he wrote on Twitter. “Here’s an image of my face a few minutes after. not a scratch.”

Fellow Twitch users, including Alinity Divine, sympathized with his plight, and superstar gamer Ninja invited Dellor to leave Twitch and join him on the Mixer platform. But Dellor’s mood took a dark turn with his next two Twitter posts.

“Im really just at a loss for words… i put in an appeal but it will probably be a month before i just hear ‘denied,’ he wrote. “I have broken keyboards over my head hundreds of time (sic). twitch staff has seen me do it and ive never recieved (sic) even a warning.”

i am broken. i have been depressed for months. i did everything i could to change. i stayed loyal to twitch. the day im supposed to get subs back they ban me for something i’ve done thousands of times. my contact in twitch says he cant do anything for me.

the mental torture ive gone through the last few months is too much. i love you all for what you’ve blessed me with but i don’t want to continue living in this world anymore.

i hope you all remember the fun times and laughs we had.

That led to an outpouring of concern on social media with people imploring Dellor, whose real name is Matt Vaughn, not to harm himself while blasting Twitch for its decision to ban him.

As Dot Esports noted, Dellor was banned for a month in May for making sexist comments when, while playing Apex Legends, he yelled at a female teammate, “Go fucking cook a fucking sandwich you fucking bitch.”

Twitch did not immediately respond to a Daily Dot request for comment, but the site does not typically speak to the media about individual users.

The National Suicide Prevention Lifeline is 1-800-273-8255. Other international suicide helplines can be found at befrienders.org. You can also text TALK to 741741 for free, anonymous, 24/7 crisis support in the U.S. from the Crisis Text Line.