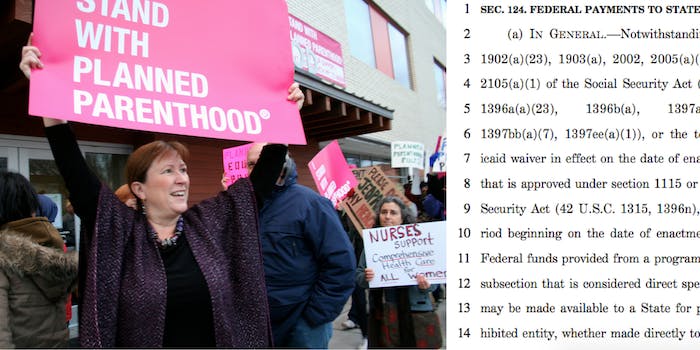 The mission to gut Planned Parenthood rolls on.

The text of the Senate GOP healthcare bill was publicly released Thursday, revealing that Planned Parenthood and other abortion providers would be defunded for one year under the bill.

The 142-page draft of the bill, called the Better Care Reconciliation Act (BCRA), includes a measure stating that any clinic that provides abortion services (other than in the case of incest, rape, or potential fatality of the mother) cannot receive federal funding for one year as of the bill’s enactment.

While two female senators were invited to join at least one meeting on the crafting of the bill, the bill itself was written by a group of 13 male senators. Texas Sen. Ted Cruz and Utah Sen. Mike Lee, two of the Senate’s most conservative members, were part of the group.

According to the Hill, Republican Sens. Liza Murkowski of Alabama and Susan Collins of Maine already suggested they may not support the BCRA if it were to defund Planned Parenthood. On Wednesday, Collins announced she and Murkowski would introduce an amendment to remove such a mandate.

“If this is the Senate’s idea of a bill with heart, then the women of America should have fear struck in theirs,” Planned Parenthood President Cecile Richards said in a statement to the Hill. “Slashing Medicaid and blocking millions of women from getting preventive care at Planned Parenthood is beyond heartless. One in five women in this country rely on Planned Parenthood for care. They will not stay silent as politicians vote to take away their care and their rights.”