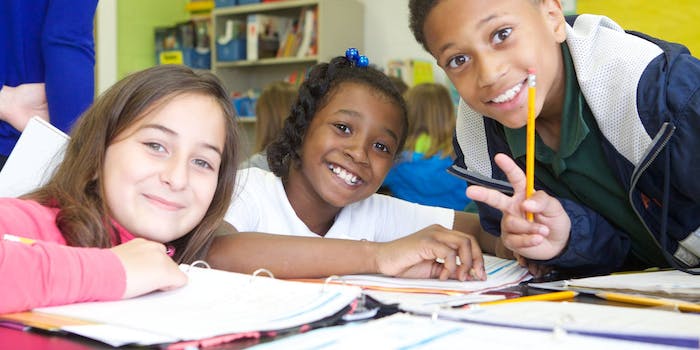 Photo via US Department of Education/Flickr

Every year around the beginning of August until the first week of September, social media feeds are clogged with an cannonade of backpack-toting children. The photos show fresh-faced kids sporting new clothes, goofy poses, and over-the-top expressions from the annoyed to the hopeful.

The back-to-school photo isn’t a new tradition. But with social media, the act has become an overwhelming performative aspect of parenthood. Many photographers offer back-to-school packages. Pinterest boards and blog posts provide an array of ideas from how to pose your kids to how to create complicated chalkboard signs. My daughter’s kindergarten even had a photo opp ready-made for parents, with an old desk, globe, and pre-printed signs for each grade K–8.

And then, every year, there’s that back-to-school picture of a mom leaping for joy, while the kids hang their heads in sorrow. You know, the one that goes viral.

My own mother, who was upset last year when I didn’t share back-to-school photos of my two kids, encouraged me to participate this year. “Everyone loves it,” she said. “You’ll regret not doing it.”

And for the most part, she is right. Back-to-school pictures on Facebook seem to be one of the few social media traditions that doesn’t annoy the vast majority of people on the internet.

Mother of two Claire Zulkey told the Daily Dot that the constant stream of back-to-school pictures is something she looks forward to.

I think they’re a symbol of optimism and pride. We put in a lot of work, not only in our kids, but getting them ready for school—between the haircuts and the new shoes and the supplies and the shots—so in some ways the back-to-school pix are a little victory lap of “We did it! We got this human off to school!” Plus it’s just sweet, that sense of anticipation and excitement. We know we probably won’t be getting those pics forever.

Even the child-free aren’t opposed to the tradition. My friend Jasmine Guillory, who has no kids, recently wrote a Facebook post encouraging not only her friends with kids to share photos, but for her teacher friends to do the same. “I love seeing them,” she explained. “The pics themselves are fun, and I loved first days of school growing up, so they also have that feel of nostalgia.”

Writer and mother of a high schooler Susanna Donato told the Daily Dot, “Time goes so fast, it helps me keep track of where my friends’ kids are. Like, what, he’s in 7th grade already? Oh, my god, I’m old! And in my own Facebook memories that pop up, seeing my 10th-grade girl this year and seeing her first-day-of-school photo from three years ago helps me have compassion for her—how profoundly she’s grown and changed in those three years.”

Even people who lampoon the tradition still say they love it. Technology and culture writer for the Austin Statesman Omar Gallaga said that while he likes to poke fun at the back-to-school pictures, he tweeted he doesn’t understand why they get so much hate.

But the barrage of happy kid photos can have also make those who can’t have children feel isolated. A friend of mine said that after struggling to have children and wondering if she will ever be able to participate in these kinds of rituals, the back-to-school posts can make her sad.

Other friends expressed concern over privacy. When parents post children’s ages, weights, birthdays, and school names in public social media posts, that information can be used by nefarious parties for identity theft and possible harm. Another child-free friend said that the constant parade of kids is sometimes overwhelming, because it’s just kid picture after kid picture after kid picture, and she usually logs out of Facebook for the month of August.

Even moms can get weary of the posts. Mom of two boys Jana Madsen told the Daily Dot, “I love seeing [the pictures] but want one of each child, not a burst of 20. And those homemade chalk signs and picture frames (I blame Pinterest)… Wow, some people are back-to-school craftmasters. I was just thankful the boys agreed to wear the clothes I picked for them so they at least match one day of the year!”

Last year, when I opted out, it was because I was tired and my kids weren’t cooperating. Forcing them to smile for something that was more about me than it as about them wasn’t high on my priorities. I also didn’t think anyone would notice—until I started getting texts from family members asking to see my kids.

This year, I posted a photo of my newly minted kindergartner, but only because she asked for the picture. Her new shoes, new dress, and fancy backpack made her proud.

Perhaps the tradition has so many defenders, because so many of us are guilty by association. Even those who don’t have kids have had to suffer through their parents’ excited first-day snaps, so they get it.

But the reason I love the pictures, even when I opt out, is because, beyond the performance, they are the perfect encapsulation of everything that I appreciate about social media: an unfiltered a celebration of the people I love for the people I love.

And for now, it’s fun to catch my kids in a moment of pride as they head off to school, feeling sassy and #werking hard.