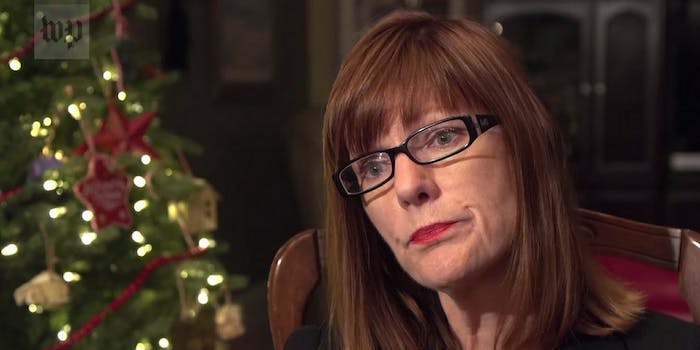 She says Moore didn't sexually assault her—but she believes the other women.

A woman who says defeated Alabama Senate candidate Roy Moore “dated” her when she was a teenager and he was in his 30s is running for the Florida state legislature.

On politics crowdfunding website Crowdpac, Deborah Wesson Gibson announced on Feb. 27 that she’s running for the 89th District seat in the Florida House, currently held by Republican Bill Hager. Gibson lives in Delray Beach, runs a sign language interpretation company, and was formerly a registered Republican but is now running as a Democrat.

In December, Gibson said she had met Moore when he spoke at her high school, then dated him after. She said she did not accuse Moore of molesting her and that their relationship consisted of consensual kissing. Gibson was one of multiple women who said Moore pursued a romantic relationship with her when they were teenagers and he was in his 30s, though several other of the women said Moore sexually assaulted them.

In her Crowdpac post, Gibson acknowledged the past several months in politics as being a nudge for her to end her time with the Republican Party.

“The past 5 months have crystallized what’s been coming to me for a decade more gradually—the Republican Party is no longer the right fit for me; I am proudly running as a Democrat,” Gibson wrote.

While she’s still preparing her platform, Gibson wrote that the worldwide Me Too movement against sexual harassment and assault is “making America great again,” along with overall strides for equality: “Women are stepping into our long overdue position of equality—along with the LGBTQ community, Deaf/[Hard of Hearing] individuals who deserve access instead of fake interpreters, and all other minorities, oppressed and marginalized groups.”

In Florida, candidate qualifying opens on June 18, with primaries on Aug. 28 and the general election Nov. 6.