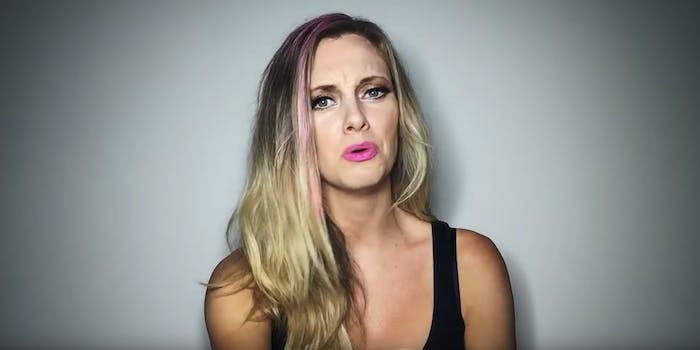 Dear Nicole Arbour: Your fat-shaming video is the furthest thing from comedy

What happens when a comedian gets caught being the opposite of funny?

In the middle of her alarmingly unfunny video, Nicole Arbour asks the viewer: “How stupid do I look? Wait, don’t answer that.”

Arbour’s video “Dear Fat People,” which was briefly removed from YouTube for its offensive content, is a five-minute rant from a self-proclaimed comedian aimed at overweight people for, well, being overweight. In the video, Arbour expresses the view that she’s not doing anything wrong because the fat-acceptance movement is equivalent to “assisted suicide.”

America undeniably has an obesity problem, but Arbour’s video isn’t about that. It’s about making people feel bad about themselves and yelling at them for their perceived unhealthiness. “You are taking your body for granted!” Arbour says to the camera, before incoherently comparing the situation to a pack of Smarties candy.

While criticizing the body positivity movement, Arbour says, “If you want to be positive to your body, work out and eat well.”

Arbour later complains about how an obese family was allowed to cut her in the airport security line because of their weight. “They complain,” she says to the camera. “They smell like sausages.”

It is no small irony that she criticizes the notion of “fat privilege”—that is, overweight people being allowed to cut the line at the airport—while simultaneously making generalizations and assumptions about overweight people. Fat people are discriminated against, often in a socially acceptable way, and her video proves it.

But Arbour doesn’t stop at fat-shaming. She also sprinkles in some racism, too, such as when she says, “Big sassy black women in church dresses are my favorite thing in the world.”

Arbour has since defended herself by arguing that the video is some sort of satire, but her social-media activity makes that doubtful.

I've received so many thanks messages from obese and overweight taking shit into their own hands now. #FeelingProud #GOTEAM

Oh exactly. And they always were the bullies… Who r flipping out cause #GOTEAM is here throwing truth bombs https://t.co/izAAb1mGlP

It doesn’t matter if Arbour tries to hide behind “satire” to avoid owning up to her video’s disturbing message. Like her predecessors Andrew Dice Clay and Adam Carolla, Nicole Arbour has found that it’s not funny to make fun of people who face discrimination because of their appearance. It’s not only mean, but it also reinforces harmful social norms. It’s “comedy” without heart.

Whitney Way Thore of TLC’s My Big Fat Fabulous Life sums up the response to Arbour perfectly in her rebuttal video: