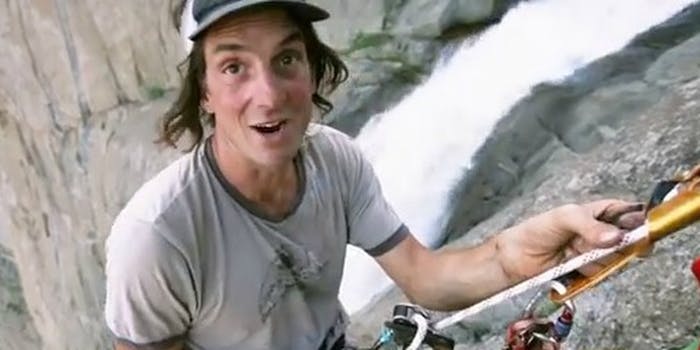 Yosemite BASE jumping accident claims the life of 2 extreme sportsmen

Dean Potter, one of the most well-known extreme sportsman in the country, has died while BASE jumping in Yosemite National Park, according to Outside. Along with 29-year-old Graham Hunt, who also died, Potter was attempting a wingsuit flight from a 7,500-foot promontory on Saturday.

Their spotter heard two sounds that could have been impacts or could have been the noises made by parachutes snapping open. She followed standard protocols, first trying to reach the pair by radio, with no luck, and then moving to a predetermined meeting place. “They were optimistic, thinking that the men might have been arrested,” says [Yosemite chief of staff Mike] Gauthier. BASE jumping is illegal in Yosemite National Park.

Yosemite Search and Rescue (YOSAR) initiated a hasty search, but the rangers were unable to locate the pair overnight. Potter and Hunt had been attempting to fly along terrain that required them to clear a notch in a rocky ridgeline. “It’s kind of a trickier flight to go through this notch,” Gauthier says. On Sunday morning, a state police helicopter was able to spot both bodies from the air. No parachutes had been deployed. Two rangers were then airlifted to the site to perform the recovery.

Potter was a controversial figure in extreme sports. He originally made his name by making well-known free solo climbs of many of the most famous rocks in Yosemite, and in the middle of last decade, he was slacklining in various national parks.

Potter had lost a sponsorship from Patagonia after he free-climbed Delicate Arch in Utah, and last November, Clif Bar dropped its sponsorship of Potter, because, according to Rock and Ice magazine, via Deadspin, the company was “terminating support to anybody who freesolo climbs, BASE jumps or slacklines.”

Here are some of Potter’s highlights, including his thoughts on his biggest childhood fear of falling to his death.

Said Potter in one of the above videos when discussing his decision to wear a parachute while trying to accomplish something dangerous. “I love the idea that I can change the worst possible thing to the best possible thing: dying to flying.”