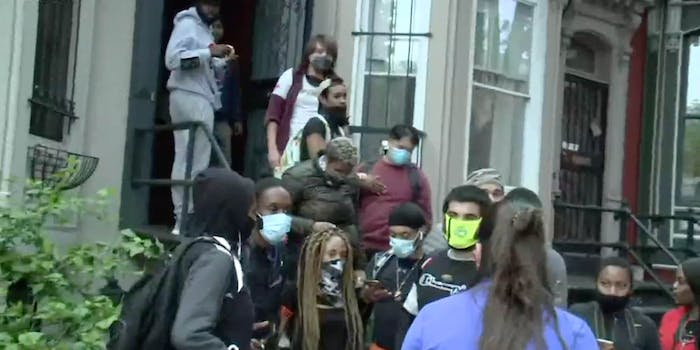 Some offered shelter until 6am.

Dozens of people say they were peacefully protesting when they were boxed in by police in Washington, D.C. Photos and videos on social media show protesters hiding from police in the homes of nearby residents.

“I’m at a house in DC after being pepper sprayed and knocked down by the police,” Twitter user @Allieblablah wrote. “There are about 100 of us in a house surrounded by cops. All the neighbors on this street opened their doors and are tending to protesters. The cops corralled us on this street and sprayed us down.”

Protesters shared their experiences on Twitter along with photos and videos. Twitter user @MekaFromThe703 wrote that the protest he was part of was boxed in by police before being “maced.” He wrote that he was invited to shelter in the nearby home of a man with other protesters.

WUSA9 reports that this same man let around 40 protesters wait out the curfew on the three floors of his townhouse. He sheltered them until the curfew ended at 6am.

Washington Post reporter Derek Hawkins spoke with the homeowner, Rahul Dubey, who said the block he lived on became a “human tsunami” and that he’s not a hero for sheltering the protesters.

“I opened a door,” Dabey told Hawkins. “You would have done the same thing.”

Dubey told Gizmodo reporter Dell Cameron that police shot tear gas through his window, and protester Alex Taliadoros shared video of Dubey negotiating with police to allow for a pizza delivery to feed the 40-plus people in his home.

“MPD promised that no one would get arrested if they ordered food for the hungry protesters trapped inside but now cops are refusing to let the driver deliver the food,” Taliadoros wrote.

At 6am, when the curfew lifted and it was time for people to go home, WUSA9 reports that most were able to leave safely, with some having been arrested while attempting to leave overnight.