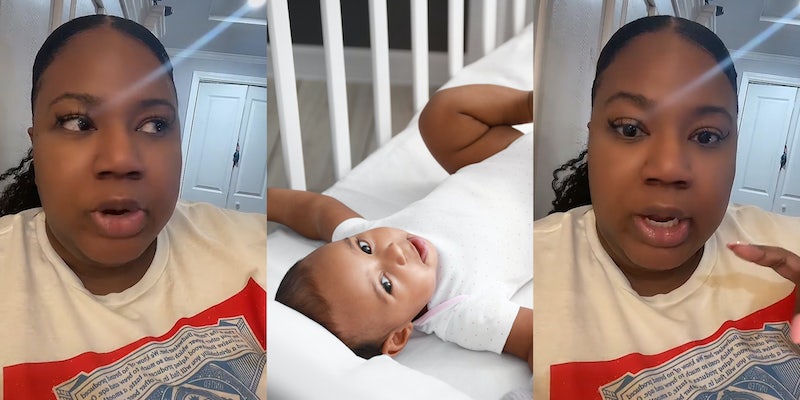 ‘Seems like retaliation against a potential lawsuit’: Parent says daycare terminated her contract after her baby faced severe injuries while there

'We already had a whole bunch of questions in our head, but you terminating our contract right after this incident?'

A parent recently went viral after claiming that her child fell out of a crib and suffered brain bleeding after being left unattended at daycare. While the 10-month-old child was recovering, the daycare then informed the parent that they would be terminating their contract with the family.

The video, posted by user Sabryna (@drmomantwine), currently has over 1.5 million views.

In the TikTok video, Sabryna lays out her full story.

First, Sabryna says she got a call from her daughter’s daycare saying that the baby did not look right and that she should be taken to a hospital. Sabryna then went to pick up her daughter, at which point she was informed via phone that they believed the girl was injured falling out of a pack-and-play, a combination play and nap space similar to a crib.

This set off alarm bells in Sabryna’s head.

“My first thought is, ‘a pack and play is on the floor. How did she fall out of a pack and play?’” Sabryna asks. “She’s not a monkey. She can’t scale the net and crawl up. She’s not that mobile yet.”

Sabryna set those thoughts aside and proceeded to pick up her daughter and take her to the emergency room. In the ER, she says she wasv informed that her daughter has two brain bleeds, or subdural lateral hematomas.

As the injury was severe, it could not be handled locally and required treatment at a hospital an hour and a half away. Her daughter stayed in the hospital for several days and received a series of tests, at which point it was revealed that she also had a spinal cord injury.

After the child was discharged, Sabryna’s husband and mother visited the daycare to speak with the owners and figure out exactly what happened. They are told that neither the daycare owner nor the owner’s employee were in the room when the incident took place.

Because of this, it is unclear exactly what led to the injury that resulted in brain bleeds and a spinal injury.

Sabryna says that her husband and mother managed to “smooth things out,” but she still wanted to take her children out of daycare for the time being.

“My momma heart is not ready for them to be out of my sight just yet,” she explains.

Two days later, the daycare called Sabryna to inform her they would be terminating her contract.

“I am blown away. Like, what?” she says. “[The] daycare completely terminates our contract, doesn’t really give us any reason.”

Even more alarm bells were set off.

“We already had a whole bunch of questions in our head, but you terminating our contract right after this incident—do you not think that’s going to provoke even more questions?” she asks.

In comments, users supported Sabryna and shared her suspicions about the daycare.

“As a former daycare director: contact state immediately for an investigation. Document all details and keep records,” suggested one user.

“I smell a case and they trying to cover up stuff,” alleged a second.

Above all, many were concerned about the status of the baby. Thankfully, she’s fine—and as a follow-up TikTok revealed, recently celebrated her first birthday alongside her twin brother.

“Her brain bleed is healing well and as of three days ago did not require surgery,” Sabryna wrote in comments. “God is good!”