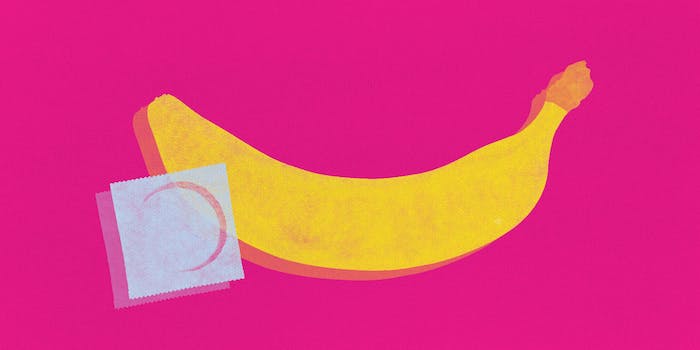 This makes no sense.

While some like to worry that dating apps and the supposed rise of casual sex among millennials will destroy their moral fiber, others are concerned about something more real: sexually transmitted diseases.

Quartz reported on Monday that many institutions such as the British Association for Sexual Health and HIV and the U.S. AIDS Healthcare Foundation (AHF) have blamed dating apps like Tinder and Grindr for the rise in rates of STDs like chlamydia, gonorrhea, and syphilis in Utah and Rhode Island in recent years. The AHF was also behind the controversial billboard linking STDs to dating apps that was raised very close to the Tinder headquarters.

But dating apps may be facing an unfair share of the blame.

Using the Centers for Disease Control’s interactive STD data set, the Daily Dot charted out how rates of chlamydia, gonorrhea, and syphilis have changed among people 20 to 34 years old, between 1996 and 2013.

Here’s how the rates shake out with Utah:

And the entire United States:

The rates seem more or less stable over time, with rates of chlamydia rising steadily for many years prior to the introduction of smartphones. But a simple line chart doesn’t tell us all that much and this data set doesn’t cover the 2013-14 jump in STD rates Rhode Island claimed it had. The Utah chart does, however, capture some of the spike in gonorrhea infections the state experienced from 2011 onward.

What does the science say?

Scientific research that focuses specifically on the use of dating apps and sexual risk-taking (multiple partners, group sex, not using condoms) overwhelmingly focuses on men who have sex with other men. So for the rest of the article, we’ll be focusing on this group of people, too.

According to one open-access paper, cited in the Quartz article, use of these dating “hookup” apps like Grindr is associated with a higher likelihood of testing positive for chlamydia and gonorrhea in Los Angeles. But this data was collected in a relatively small sample of men (7,184) isolated to a very small region of the United States. Moreover, the men sampled were all collected from a single sexual health clinic. Not exactly a nationally representative sample of people who use hookup apps.

But giving them the benefit of the doubt, there are a few things that may explain why app users were more likely to test positive for STDs. It could be something simple: using an app where all the users are interested in a sexual encounter greatly increases your batting average when it comes to finding sex partners. More sex partners means more opportunities for an infection.

Research on the latter theory is very mixed, according to one open-access study. The reason for these discrepancies, the researchers say, may be because many of the studies that look at risk-taking behavior and social networking don’t limit their studies to just one type of online venue for finding sex partners. They include Grindr with other dating websites, chatrooms, and other platforms. Additionally, many of these studies only look at a small group of people in an isolated region.

It’s also hard to say if Grindr really increases the number of sex partners across all users. While it certainly has the capacity for it, that would assume every user uses the app for the exclusive purpose of finding multiple casual sex partners, instead of, say, using it to find new friends or exclusive sex partners.

Some also worry that because Grindr and Tinder promote anonymity among hookups, it would be harder for a person who tests positive for an STD to provide contact information for past partners to the clinic, allowing them to reach out and get them in for testing as well.

This claim simply doesn’t make sense. People can still keep in touch with matches through the apps themselves. Moreover, many people may exchange contact information like phone numbers or emails before the first meeting anyway, to make it easier to find each other.

Going home with a person you met at a bar or a party, on the other hand, requires no exchange of contact information or even a name.

The real crux of the issue is the message of safer sex. According to the AHF, Tinder has no messages about safe practices when it comes to sex, despite the many tips it’s given for arranging rides and meeting matches in public. Grindr’s safety tips also don’t include any messages about safe-sex practices.