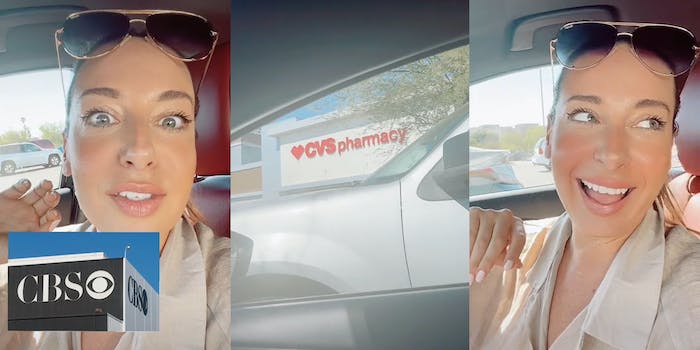 ‘He works at CVS, not CBS’: Woman says she picked up date from work thinking he was employed at CBS, sparking debate

'Does it matter where he works?'

A TikToker went viral yesterday after saying she misheard a guy she went on a date with, thinking he worked at television network CBS but found out he actually worked as a cashier at drug store CVS. The viral video sparked debate over classism, financial stability, and dating standards.

The video was posted by TikToker Kerry Schwartz (@comfywith_kerry), who is the author of a memoir called “Series of Unfortunate Men” which details the lessons she’s learned regarding boundaries and standards from her history of bad dating experiences. On her TikTok account, which boasts over 79,400 followers, she makes videos about some of the unfortunate and funny dates she’s been on, including an unusual experience with a Food Network host.

In her viral TikTok shared Wednesday, Kerry describes allegedly meeting a cute man in line at Trader Joe’s who she exchanged numbers with. On the phone, Kerry says she was impressed when she thought he told her he worked at CBS. She says he asked her out for lunch, and also asked her to pick him up from work for the date.

Although she thought it was weird he asked for a ride, she plugged in the address he sent and went to go pick him up anyway. To her surprise, she showed up at CVS Pharmacy—not CBS Studios. In the video, she films herself allegedly arriving at the location.

“That’s CVS guys. He works at CVS not CBS!” the TikToker says, laughing in the video.

“Send me an SOS,” she captioned the video, which received over 3 million views.

In the comments section of the viral video, users debated whether the Kerry’s video was classist or too judgmental.

“I’m confused. So what?” one user criticized.

“And what is wrong with cvs? That’s his job. Kudos cvs worker,” another commented.

“Does it matter where he works? he has a job. the inside matters as well as his looks. he might a GREAT a guy,” a third argued.

On the other hand, some users in the comments section came to the TikToker’s defense.

“A woman in her 30s ready to settle down needs a financially stable partner. An equal. Sorry but minimum wage and no car doesn’t cut it,” one user defended.

“I’m gunna say what she won’t to the ‘aT lEaSt He GoT a JoB’ comments.. Grown, financially stable women are not looking to be taking care of someone,” another argued.

In two follow-up videos, Kerry says she doesn’t think there is anything wrong with working at CVS and she wasn’t laughing at her date for working at CVS, instead she was “just making fun” of herself for mishearing the guy. The TikToker says when she heard he worked at CVS and learned he was a cashier, it didn’t change her mind about going on a date with him—she doesn’t care where he works.

“We wound up not having anything in common over the date and I actually told him that I thought he said CBS and we got a kick out of it and we laughed about it,” the TikToker describes in a video. “He does not have a car, he lives with two roommates. I’m not shaming the guy, but I’m a 36-year old woman. He’s 38. I’m looking for a man that is mentally, emotionally, and financially stable. He doesn’t have to be rich.”

The TikToker says in the video she does not come from a wealthy family and worked hard to get to where she is today, and has learned to raise her standards after multiple bad experiences with men.

“So yes, I’m going to be picky with who I end up with now because the next person I date seriously is going to be the last one,” the TikToker adds. “He’s a nice guy and I wish him the best.”

The TikToker also says the man mentioned in the video is aware of the situation and thinks it’s no big deal. She adds that he agrees they are not compatible, and they both had a laugh about it.

In an email to the Daily Dot, Kerry said she was upset by the comments saying she was unfairly making fun of the man in the video. She claimed she was actually formerly employed by both CVS and CBS herself and thinks neither workplace is more valuable than the other.

“As someone who is a mental health advocate and has been through a fair amount of trials and tribulations…a lot of the comments really upset me,” the TikToker told the Daily Dot. Anyone that follows me or watches my videos know that I’m constantly making fun of myself and my dating history.”

“I wrote a book about my toxic relationships, abuse, and heartbreaks with men,” she continued. “I’m at a point in my life where I’m very happy being single and finally learned to love myself after 36 years. We are all entitled to have standards and boundaries. I don’t have the emotional or mental capacity to support a man when I struggle to support myself in those areas. Stability in all areas are important for me and I think any human who has been through trauma and hardship in their relationships would feel the same.”