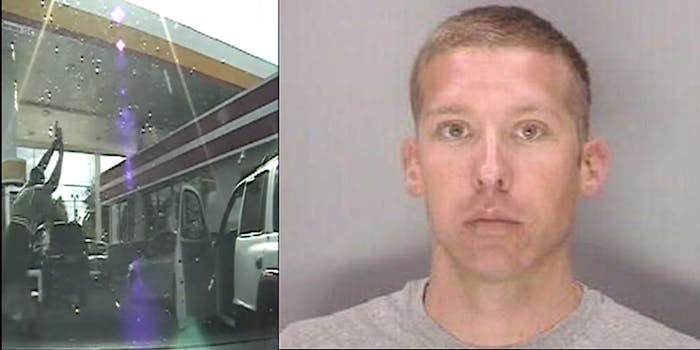 State Trooper Sean Groubert has been fired and arrested after firing three times on a stunned driver.

Dashcam footage of a routine traffic stop in South Carolina earlier this month shows a state trooper firing his gun three times on an unarmed black man as he tries to reach for his driver’s license.

Former highway patrolman Sean Groubert, 31, was fired Friday and arrested last night for felony assault and battery of a high and aggravated nature after the incident. Groubert stopped 32-year-old Levar Jones for a seatbelt violation in Columbia, S.C., on September 4. Groubert asked him to step out of his car, then unloaded his gun, shooting at least three times at Jones and striking him once in the hip.

The dashcam video shows Jones, who was not armed, leaning into his van in order to comply with Groubert’s request to get his driver’s license. At that point, Groubert rushes forward and fires numerous times at Jones, who throws his hands up as he falls to the ground. After Jones asks Groubert what else he wants him to do, Groubert asks, “Are you hit?”

“I think so,” Jones replies. “I can’t feel my leg. I don’t know what happened, I just grabbed my license.”

When Jones asks Groubert why he shot him, Jones replies, “Well, you dove headfirst back into your car.”

“I’m sorry,” Jones replies. The video indicates that Jones was cooperating peacefully with Groubert’s request to retrieve his license at the time he was shot.

In a statement issued last week, South Carolina Department of Public Safety Director Leroy Smith called the case disturbing, noting that “the force administered in this case was unwarranted, inconsistent with how our troopers are trained, and clearly in violation of Department policies.”

If convicted for the shooting, Groubert faces up to 20 years in prison. His arrest warrant can be read here.