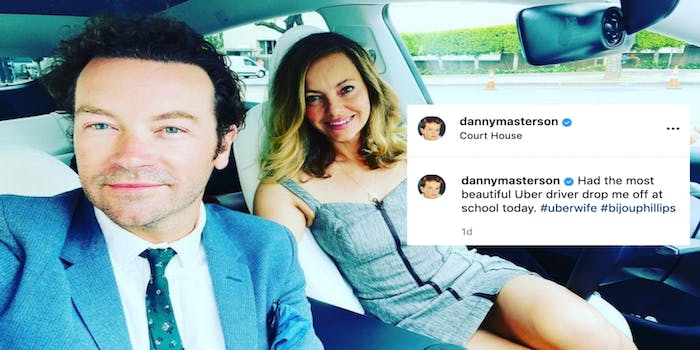 ‘I’ve seen that smirk before’: Actor Danny Masterson smiles in selfie before hearing on rape charges

'I think millions of women have seen that smirk before.'

Actor Danny Masterson, best known for his role on That ‘70s Show, posted an Instagram selfie on Tuesday as he headed to a preliminary hearing for rape charges against him at the Los Angeles Superior Court.

“Had the most beautiful Uber driver drop me off at school today,” the caption reads. Masterson, decked out in a blue suit and floral tie, is referring to his wife, Bijou Phillips, who smiles next to him in the photo.

People online said they were disgusted or disapproved of the photo for public relations reasons.

“Even if you’re 100% innocent, don’t be flip about the process,” one user commented. “On a decency level, it’s disrespectful and on a PR level, it’s not the sort of message you want to be sending while you’re facing being tried for three counts of rape.”

Others said the photo was intimidation against women, and he bore a smirk many women were familiar with. “Look how carefree I am, I’m not even worried,” is the message one user got from the photo. “No one will believe you or cares so just give it up.”

One of Masterson’s accusers delivered a graphic and tearful testimony of the alleged rape at the hearing, Vulture reported. The woman, who identified herself as Jen B., said she remembers drifting in and out of consciousness before waking up with Masterson on top of her. She said this happened after he gave her a vodka cocktail and began feeling weak and nauseous.

“The first thing I recall is grabbing his hair to pull him off,” Jen said. Jen said at one point, Masterson grabbed a gun to threaten her as she fought back.

The woman said she and Masterson were connected by their involvement with the Church of Scientology. Jen said after she was raped, the church and other members discouraged her from going to the police.

According to Los Angeles Times, Jen said the first church official she confided in told her not to use the word “rape” and prevented her from contacting the police. Despite fears of being excommunicated from the church and from her family and friends, she decided to file a police report.

A spokeswoman for the Church of Scientology denied Jen’s accounts of the church’s “suppressive acts” or that any church members discouraged the women from reporting the rape to police, according to the Times.

Two other accusers are expected to testify against Masterson this week, and people online are already making their opinions known.

“I certainly wouldn’t be smiling as I dropped him off for his rape case and there would likely be divorce papers in the works,” one user commented.