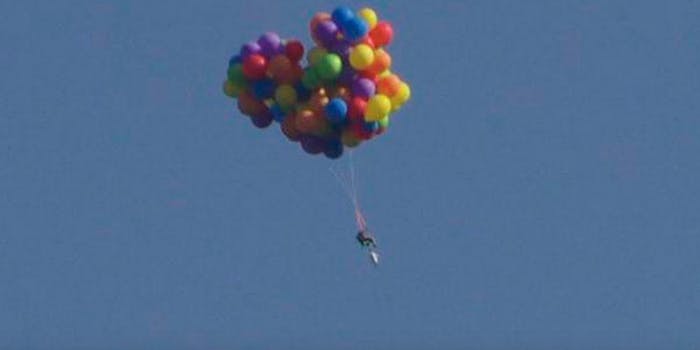 Yes, it actually worked. But then it took a turn for the worse.

We can only imagine what sort of legal trouble Carl Fredricksen got into for lifting his house with balloons in Pixar’s Up, but when Canadian businessman Daniel Boria came down from the clouds, the police were waiting for him.

Boria, 26, was arrested for one count of “mischief causing danger to life” after he attached 110 balloons to a lawn chair Sunday and flew across Calgary, Alberta. He was released later that day.

He spent approximately $20,000—with $12,000 of it in helium—to pull of the stunt, which was meant to promote his cleaning products company.  Boria intended to parachute into the Calgary Stampede, an annual rodeo.

“It was incredible,” Boria, who at one point saw a 747 flight taking off below him, told the CBC. “It was the most surreal experience you can ever imagine. I was just by myself on a $20 lawn chair up in the sky above the clouds.”

While Boria claims Up wasn’t an inspiration, he strapped the balloons to the lawn chair in a similar manner to the film. He said he didn’t want to just do a billboard or a commercial, and it was “just the most amusing and best way I could think to get to altitude.”

Just saw this floating through the skies of Calgary. Hope it’s not a stampede #balloon vendor out of control. #yyc pic.twitter.com/xcI07rdRw9

Although Boria planned ahead as much as he could, he found there were some things you couldn’t completely account for—like the weather. He missed his target landing point of the Calgary Stampede and landed in an industrial field in the southeast part of the city. Aside from a sprained ankle, Boria remained unharmed.

The police were there to meet him, where he was promptly arrested and charged in relation to the lawn chair, which is still missing and could cause damage once it falls to the ground. Inspector Kyle Grant thought that Boria should’ve just stuck with paying for a billboard. It might have been cheaper in the long run.

“I know that the courts won’t look upon this with any sort of jocularity,” Grant told the CBC. “When you are taking people’s safety into account, especially when you are talking about the Stampede—hundreds of thousands of people who are on the grounds in a given day—that’s not something that any justice will take lightly at all.”