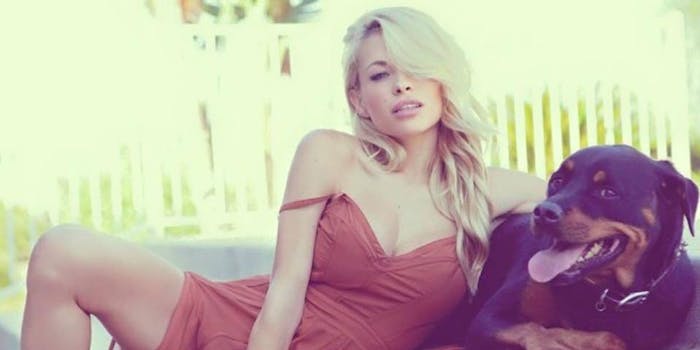 Dani Mathers' Snapchat woes are far from over.

Playboy Playmate Dani Mathers has faced widespread backlash after posting a body-shaming photo on Snapchat that showed a nude woman changing. Mathers not only invaded the privacy of a fellow L.A. Fitness patron without her consent in July, but she sent the snap to her followers with the caption, “If I can’t unsee this then you can’t either.”

The model’s been banned for life from L.A. Fitness. Now, she could potentially face jail time for her actions.

The Los Angeles City Attorney is reportedly still reviewing the case, but the victim of the snap, a woman in her 70s, would like to see her charged with dissemination of private images, TMZ reports, and is willing to cooperate with the investigation. That charge would carry a maximum penalty of six months in jail.

Mathers posted a public apology on YouTube and sent multiple tweets on Twitter before she deleted her account. She has yet to respond to news of her victim coming forward. Her lawyer has, however. Reached by the Wrap, attorney Tom Mesereau said: “I hope the rumors are not true. Dani Mathers never tried to hurt anyone at any time and certainly never tried to break the law.”

Mesereau is perhaps best known for his involvement representing Michael Jackson in a 2005 child molestation. He also previously represented Mike Tyson. Mathers reportedly enlisted his help shortly after she made headlines.