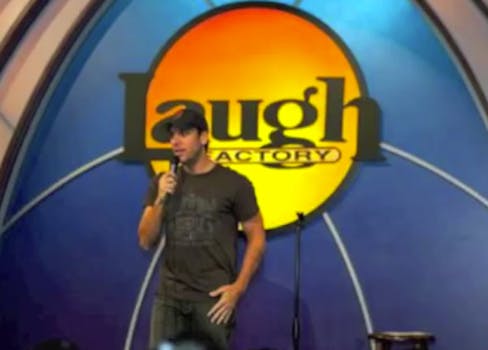 Dane Cook jokes about Aurora shootings, gets flak from Internet

"Somebody in that theater, about 25 minutes in, realizing it was a piece of crap, was probably like ‘ugh fucking shoot me,’" Cook joked at the Laugh Factory. For many, the bit came too soon after last week's tragic shootings.

Taking a page from the seemingly misguided Daniel Tosh playbook, comedian Dane Cook made a joke at the Laugh Factory that made light of last week’s mass shooting at a midnight showing of The Dark Knight Rises in Aurora, Colo.

“I know that if none of that would have happened, pretty sure that somebody in that theater, about 25 minutes in, realizing it was a piece of crap, was probably like ‘ugh fucking shoot me,’” Cook jokes in a video put online by The Daily Caller. The audience responds with groans that quickly transform into laughs and cheers.

While comedians Tina Fey and Louis C.K. are beloved Internet favorites, Cook doesn’t attract the same positive attention. In fact, it’s usually quite the opposite. So it’s not surprising that the comedian’s receiving post-show jeers from the web: “Just heard the tasteless Dane Cook joke. I didn’t know you could go lower than rock bottom,” tweeted @DAKing240.

Others are defending Cook–but not because they are necessarily fans of his humor. “Dane Cook might have sounded insensitive, but he’s a fucking comedian. That’s what they do. So everyone should SHUT THE F**K UP,” tweeted @KattNunya, who joined a chorus of voices that took issue with the implied censorship of topics for comedians to joke about.

With bootleg recording of comedy shows becoming standard, and those videos getting put online often before the show is even over, comedians trying out offensive jokes often get a larger test audience than they may have wanted.

But that hasn’t stopped comedians like Cook or Tosh from putting those jokes out there, unafraid of the consequences. Or perhaps expecting them.