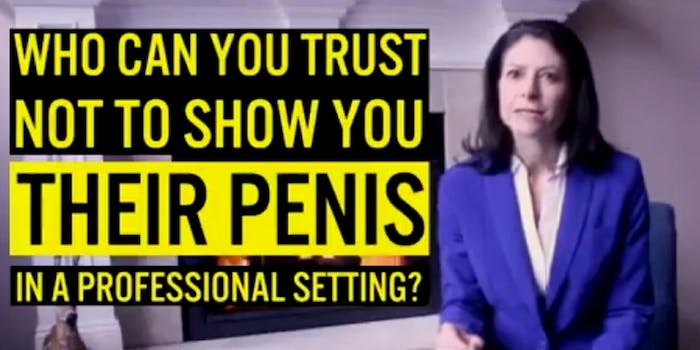 'Who can you trust most not to show you their penis in a professional setting?'

Want to see just how low the bar is for people running for political office? Just watch the latest political advertisement for Michigan attorney general candidate Dana Nessel, in which she hilariously drags high-profile male politicians and media personalities over sexual harassment or assault allegations.

“If the last few weeks have taught us anything, it’s that we need more women in positions of power, not less…Ask yourself this: ‘Who can you trust most not to show you their penis in a professional setting?'” Nessel tells the camera after flashing photos and headlines of Alabama Senate candidate Roy Moore, broadcaster Charlie Rose, and President Donald Trump. “Is it the candidate that doesn’t have a penis? I’d say so.”

In her two-minute-long ad, Nessel continues to berate concerns that Michigan Democrats will have an all-female ticket for 2018—the governor and secretary of state races both have one Democratic female candidate. But while questioning if Democrats can “afford” to have only women represented, Nessel asks, how can the state afford not to?

Nessel goes on to make the bare minimum of promises that it seems many male politicians and media men cannot make themselves: If in office, she will not sexually harass her staff, tolerate workplace harassment, nor walk around in a half-open bathrobe (as Charlie Rose was said to have done to female employees).

“You won’t find me using your hard-earned tax dollars to silence victims,” Nessel says, referring to Texas Rep. Joe Barton and Michigan Rep. John Conyers, “or join right-wing lawsuits that make it harder for you to get health insurance. I’ll be too busy doing what I’ve always done. Going to bat for the people who need it most, and winning.”

Since Nessel’s campaign shared her ad on Monday, the video’s been shared more than 400 times, and viewed more than 20,000 times, catching the attention of internet personalities and slowly gaining virality from Facebook to Twitter.

It’s almost laughable that Nessel has to outline these points in her ad, but that itself is the point. Given the climate of male politicians refusing to resign from positions or races when accused of sexual harassment or assault several times, Nessel makes her promise because it is somehow not an expectation for politicians to not abuse their power in the form of harassment or coercion.

“I am a woman. That’s not a liability,” Nessel says concluding her ad. “That’s an asset.”

Here’s my plan for putting an end to the continued sexual harassment scandals: elect more women.Please like and SHARE