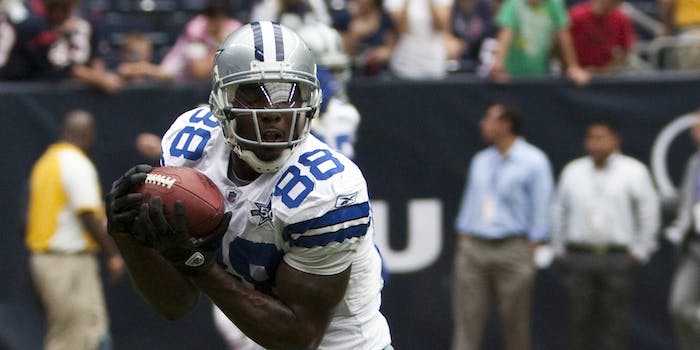 Twitter has a long memory. If you follow major sports websites like @ESPN, @SportCenter, @SportsNation, and @BleacherReport, you’ll notice that the conversation over one specific NFL play just refuses to go away.

Three months after it happened, the now-infamous called-back catch by Dallas Cowboys receiver Dez Bryant—in a Jan. 11 game that the team lost to the Green Bay Packers—is still one of the hottest topics in Sports Twitter.

Here is the play in question:

The Cowboys made the pass on a 4th down late in the game when they were losing to Green Bay. A catch would have given them a go-ahead touchdown opportunity and a chance to take the lead, but after a Green Bay challenge and an official review, the call was reversed and the ball was given back to the Packers, who subsequently ran the clock out and won the game. The loss knocked the Cowboys out of the playoffs.

It was one of the most controversial rulings of the year and perhaps the NFL’s entire history.

You don’t have to hunt for signs that Bryant’s non-catch remains a vibrant topic of conversation. Click on any random tweet from a top sports website and you’ll almost certainly see at least one reply that mentions it. “Dez caught it,” “Dez dropped it,” or some variation on the theme has been a regular sight ever since the controversial event—and the meme shows no signs of disappearing.

The tweets being hijacked often have nothing to do with the Cowboys or even professional football in any form. Regardless, the ensuing reply threads often turn into forums for debate over the play.

NFL referees make hundreds of bad calls every year, but there’s something that makes the Bryant play special: The egregious offense was directed at none other than “America’s Team,” the Dallas Cowboys.

If there’s one group of fans that can carry a grudge, it’s Cowboys fans. By the time they geared up for the face-off with the Packers, quarterback Tony Romo’s career hadn’t given them a lot to cheer for. Romo’s perfect pass and Bryant’s miraculous catch—and let’s be honest, it was perfect—were supposed to catapult the Cowboys into the NFC championship game—and potentially the Super Bowl. The fact that the magical run ended on such a sour note was bound to leave a bad taste in fans’ mouths, and that’s just what happened.

Will Twitter ever let the past pass? We may need to wait until next season to find out.