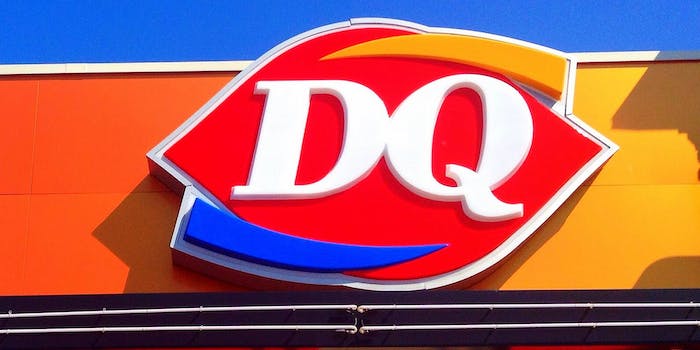 Dairy Queen shuts down after owner goes on racist rant

He told an officer he is 'fed up with black people.'

Free speech means the federal government is not allowed to punish you for speaking your mind. However, if what you’re saying and doing violates your private employer’s code of conduct, they can absolutely take action. Which is what happened to the owner of a Zion, Illinois Dairy Queen who shouted racial slurs at a black customer.

Deianeira Ford told the Washington Post she had received a wrong order at the Dairy Queen drive-thru last week when she visited with her kids and asked owner Jim Crichton to fix it. He refused, and though he refunded her the $5, he began shouting at her. “He called me and my children n—–; he said I can go back to where I came from,” she said.

According to the officer’s report of the incident, “Crichton boastfully told me he would be happy to go to jail over the issue and proudly admitted to calling Ford a n——. He added that he is ‘fed up with black people.’”

Though Crichton’s words were hateful, they weren’t illegal. But when Ford took to Facebook to describe the incident, Dairy Queen’s corporate headquarters shut down the Zion location and it will remain shuttered until a new owner is found. “We expect our franchisees and their employees to treat every single person who walks through their doors with the utmost dignity and respect. Nothing less is acceptable,” a Dairy Queen spokesperson told the Chicago Tribune.

Crichton has since apologized. Ford also mentioned he evoked Donald Trump’s name in his tirade before telling her to “go back to where [she] came from.”