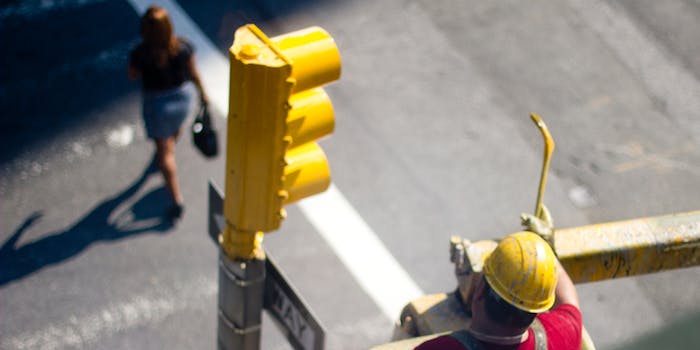 Dads react to the catcalling their daughters experience every day

The results are surprising and not in a good way.

Do men really know what the women in their lives go through on a daily basis?

Apparently not. In a new video from the Scene, three father/daughter pairs sat together and watched candidly shot footage of the daughters walking down the street getting catcalled and followed. The results are surprising and not in a good way: Each of the three dads seems sort of surprised.

In case you, like the dads in the video, need an education on what it’s like to be a woman in 2015: According to an 2014 international Cornell University study in conjunction with the anti-street harassment group Hollaback, 96 percent of women 40 and under experience street harassment at least once a year. (The other 4 percent were clearly bedridden, in jail, or in some way otherwise unable to move around the city. As far as I know every woman gets catcalled in New York City—even my 65-year-old mom.) Most disturbingly—but not surprisingly to any woman—was the report that 84 percent of women in the U.S. had been catcalled before age 17.

Yet somehow, 16,600 women from a variety of countries around the world all saying the same thing isn’t enough. We need proof. On video. In one segment, a father is aghast at how frequently his daughter is harassed in the video. He says, “They don’t say that when you and I are walking down the street. I didn’t hear any of that on the way here.”

The daughter’s face has a pained look that seems to say, My dad is an idiot. Then she tells him, “Yeah, it’s usually an every day thing.”

Maybe it is a useful educational experience for these dads and other men who are clueless about the pervasiveness of street harassment. Clearly these videos hit a cultural nerve: In a similar video posted by Cosmopolitan magazine  July 27, men watched their girlfriends being catcalled (also while walking through Manhattan). The Daily Show‘s Jessica Williams also filmed a segment on street harassment in 2014 that featured a diverse room full of women testifying on street harassment occurring “100 percent of the time” in their lives.

A lot of us watching videos like this can’t get past the “duh” quality, though. Do we really need so many of these videos where women get catcalled? If 96 percent of women say they’re getting harassed and describe in detail what happens, shouldn’t that be enough for them to be listened to and understood? It’s one thing to be constantly bombarded on the streets with sexual comments, name-calling, threats, following, and even groping. But women are also still struggling to “prove” it to the men in their lives.

One video at a time, apparently.

H/T The Source | Photo via HelloTurkeyToe/Flickr