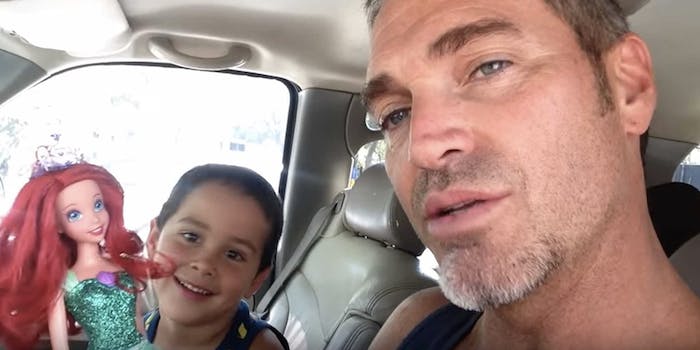 His son wants a Princess Ariel doll. So what?

When you hear about a kid with a new Disney princess doll, who pops into your head? It’s probably a little girl in a glittery, flouncy princess dress.

Well, not always. One father is doing his part to change that stereotype.

On Friday, filmmaker Mikki Willis shared a video he filmed after taking son Azai to the toy store to exchange a duplicate birthday gift. His son’s choice? A Princess Ariel doll:

“Now, how do you think a dad feels when his son wants to get this?” Willis asks the camera, gesturing with the doll. “YEAH!!!” Azai excitedly shouts, a sentiment the boy’s father enthusiastically echoes.

“Choose your expression, choose what you’re into, choose your sexuality, choose whatever,” he tells Azai and brother Zuriel. “You have my promise forever to love you and accept you, no matter what life you choose.”

The video has been viewed over ten million times on Facebook since it was originally uploaded last week (and an additional six thousand times on YouTube since it was uploaded there yestederay). The comments are largely positive, lauding Willis for his loving and supportive parenting.

Michele Yulo, founder and president of Princess Free Zone, Inc., praised Willis’s video in an email to The Daily Dot. Yulo’s own work is focused on combating gendered stereotypes and supporting individuality among girls; she recently launched a Kickstarter campaign for Suit Her, a clothing line of fitted suits designed for girls ages five through twelve. While boys are not her typical demographic, she was thrilled to see a father supporting his young son’s choice.

“What this amazing father is doing is what all parents should be doing—allowing their children to express themselves freely,” Yulo told the Dot. “In my opinion, that is true nurturing. Telling a boy he can’t play with a doll limits his potential not only in terms of how he will develop into man, but into a compassionate and fully-developed human being.”

Azai and his Ariel doll join an ever-growing group of children finding support online for embracing their interests, regardless of gender norms; eight-year-old Layla Murphy, for example, recently received an outpouring of support from such notable voices as the 501st Legion and “Weird Al” Yankovic after she was bullied for loving Star Wars and Guardians of the Galaxy. Even corporations are taking note and making it easier for parents and children to shop sans stereotyping—earlier this month, Target announced that they will no longer separate toys into gendered sections. We’ve come a long way since Riley’s rant raised consciousness on this very issue four years ago.

[I]t didn’t surprise me at all that Azai chose such a doll at the toy store. He’s equally fascinated by princesses and robots. One moment he’s all boy, the next he’s expressing a softer, more angelic side. For me this behavior rings more authentic than playing one note all the time.

All that said, I did have a little reaction to Azai choosing that particular doll. When I saw the collection it was part of, and didn’t see much in the way of variety when it comes to skin colors or body types, I had to resist my urge to say, “Why don’t we chose a more realistic doll?” I don’t want my boys to adapt to the programming that a women should be built like a Barbie. I said, “Let’s look at all the dolls in the store first, then you can decide.” He was clear, “I want this mermaid.” I backed off knowing this would be the catalyst for us to have a fun conversation about the beauty of body-types and racial equality.

My job as daddy is to provide a safe playing field for my boys to play whatever game they choose, or better yet, create their own game! I trust that by the time they realize the world isn’t as accepting as mommy and daddy they’ll have such a solid foundation that nothing will shake their stance to fully, and unabashedly be themselves.