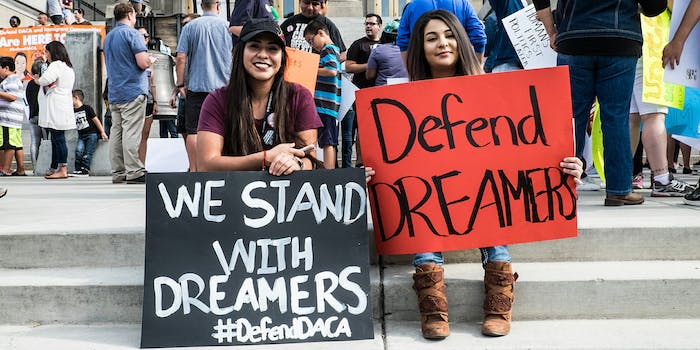 As multiple national lawsuits attempt to either dissolve the Deferred Action for Childhood Arrivals (DACA) program or bring it back to its original purpose of protecting undocumented youth brought to the U.S. as children, DACA recipients themselves are preparing for the worst.

Undocumented people who’ve never had DACA aren’t currently allowed to apply, but people with one year left of their two-year status are being encouraged to reapply as soon as possible, in the hopes that they’ll be protected for another two years should a court decide to pause renewals or end the program altogether. Each time a recipient reapplies for a renewal, though, they’re required to pay $495 to U.S. Citizenship and Immigration Services. So, many of them are creating crowdfunding pages to assist with the fee, along with other related costs, such as legal assistance. According to GoFundMe, donors have already raised more than $200,000 for renewal applications.

To help streamline this process for Dreamers, crowdfunding site GoFundMe has partnered with bipartisan tech and policy organization FWD.us.

Dreamers are young, patriotic people who are American in every sense but on paper. We’ve partnered with @FWDus to launch a new centralized hub enabling Dreamers to quickly start a GoFundMe & pay their $495 DACA renewal application fee. Learn more: https://t.co/Yb4VyuoJHL

The partnership, announced Thursday, consists of a “centralized hub” for verified crowdfunding campaigns from DACA recipients, where DACA recipients can quickly start a GoFundMe campaign to raise funds for their renewal fee. The DACA hub is also being featured on the site’s homepage.

Bobby Whithorne, GoFundMe’s director of North America communications, told the Daily Dot that after a DACA fee campaign is created, it’s added to the hub, where people can donate individually, or to GoFundMe’s “Direct Impact Fund.” The Direct Impact Fund is an independent, registered 501(c)(3) non-profit organization, so donations made to this fund are tax deductible. Donations made to this fund will then be distributed among existing DACA renewal campaigns.

Whithorne said that campaigns are reviewed and monitored by the company’s team of experts and are added to the DACA hub based upon its campaign objective and the date it was created. Campaigns are then rotated on a regular basis, and show community members the renewal campaigns in their area. Under the partnership, GoFundMe has also created a set of guidelines for campaign creators, such as how to go about setting up and promoting their donation page.

Peter Boogaard, communications director at FWD.us, told the Daily Dot that FWD.us assisted GoFundMe in creating the framework and language of the DACA hub, and is working with its own network of Dreamers and DACA recipients to share this resource with them. DACA recipients have become more courageous and outspoken about the adversity they face in recent years, Boogaard noted, and may have greater access to financial support as a result of this increased visibility with this partnership.

“We hope that Dreamers who need financial assistance will use this great resource from GoFundMe and that those who are able, contribute to their campaigns,” Boogaard said.

“We are very proud of this new partnership with GoFundMe and we thank them for their ardent support in order to provide additional support to Dreamers during such a critical time,” FWD.us President Todd Schulte said in a statement shared to GoFundMe’s blog. “Given the uncertainty in the courts, we strongly encourage all Dreamers who are eligible to renew their DACA to contact a lawyer and pursue a renewal immediately—and to use tools like the GoFundMe DACA Hub to assist them in raising necessary funds.”

Kenia Ceron, a DACA recipient, previously told the Daily Dot that she was able to raise $1,500 on GoFundMe within 10 minutes after starting a campaign for her and her siblings to renew their DACA status. She kept the campaign open, and in less than a day, she had raised enough funds to help another nine DACA recipients in the Des Moines, Iowa, area.

“Through the process of fundraising for fees, I’ve learned a few things that have proven to be successful and such information must be shared with everyone,” Ceron said in July, after creating a Twitter thread showing others how to create a successful DACA renewal crowdfunding campaign.

Through GoFundMe and FWD.us’ partnership, DACA recipients will hopefully have one less thing to worry about while raising funds and awareness for their cause.