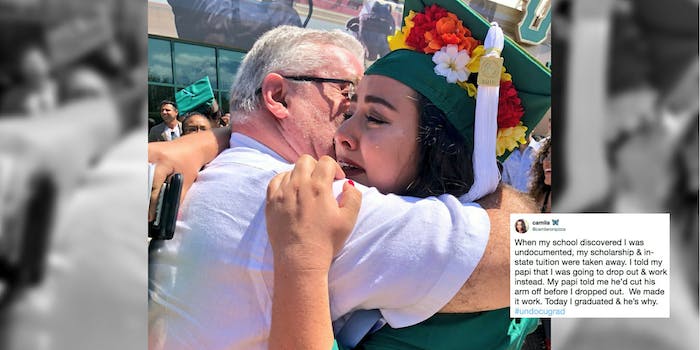 DACA recipient’s graduation story has the internet in tears

'It’s not about how long it takes you, but it’s about you getting there.'

A University of South Florida graduate has gone viral after sharing her tearful story of resilience on Twitter, showing that undocumented people are not only Dreamers but achievers.

Following her May 5 graduation celebrating her dual psychology and behavioral healthcare degrees, 22-year-old Camila Silva shared a photo of herself crying as she and her father embraced. Silva, a recipient of the Deferred Action for Childhood Arrivals (DACA) program, wrote that she was going to drop out of university once her financial resources were taken away from her for not being a U.S. citizen, but her dad firmly pushed back.

“When my school discovered I was undocumented, my scholarship & in-state tuition were taken away. I told my papi that I was going to drop out & work instead,” Silva wrote. “My papi told me he’d cut his arm off before I dropped out. We made it work. Today I graduated & he’s why.”

Silva told BuzzFeed News she and her parents migrated from Argentina to the U.S. when she was 5. Growing up in Tampa, Silva was unaware she was undocumented and even applied to college believing she was a U.S. citizen; meanwhile, her father secretly and successfully applied for her to become a DACA recipient.

DACA, created under President Obama, protects people who arrived in the U.S. as children from deportation and allows them to work in the U.S. legally; nearly 700,000 young people have DACA. Last year, President Donald Trump ordered the ending of the program, though federal judges have allowed DACA to remain in place while lawsuits against the administration over the program play out in court.

Silva said the university ended up processing her as an international student and awarded her a merit-based academic scholarship for her GPA and SAT scores. She was also given in-state tuition, a third of the cost of out-of-state tuition. However, when Silva attempted to register for summer classes, she said the school realized she was undocumented. She said that was when she found out she was undocumented, too.

The university subsequently took away her scholarship, reverted her to paying out-of-state tuition, and required she pay back whatever portion of the scholarship she was already awarded. A USD spokesperson was unable to confirm the details due to student privacy laws but confirmed that state funds for scholarships are only awarded to U.S. citizens.

When Silva thought she’d have to drop out, her family pitched in to help her afford the tuition. Her dad worked constantly, her mom cleaned houses, and Silva pulled back on the number of classes she took at once to work full-time. Around the time her tuition rose, Florida legalized in-state tuition for all Florida high school graduates regardless of status, making Silva eligible for in-state tuition once again.

“Honestly, we just worked a lot,” Silva said. “It was difficult but I always kept my goal in my mind.”

Several people have congratulated Silva on her achievement.

Amazing immigrant stories from those who believe in hard work & the American dream. If only the President showed compassion to people like @camilaronipizza https://t.co/nu8Yqi14tA

But others have disparaged her efforts, going so far as to ignorantly tag U.S. Immigration and Customs Enforcement (ICE), the immigration agency tasked with detaining and deporting undocumented people. ICE, however, legally cannot detain nor deport DACA recipients such as Silva.

The University of South Florida stated its support for DACA and DACA graduates in a message to BuzzFeed News and said it’s proud of the university’s diversity.

“The University of South Florida congratulates each of the thousands of students who earned their degrees this past weekend,” the statement read. “USF stands with hundreds of other universities in supporting the federal [DACA] program and the benefits it provides for our students.”

Silva, however, isn’t deterred by the online vitriol and is attending the Colorado State University in the fall for a master’s in student affairs in higher education.

“I made a decision a while ago when I came out of the shadows that I was not going to allow fear to run my life,” she told BuzzFeed News. “The hatred can continue, and people can continue to try to get me deported, but I know everything they’re saying is rooted in lies. And it’s rooted in fearmongering, so I’m just focusing on the positive.”

Silva encouraged other DACA recipients and undocumented graduates to not to let the hate or their status keep them down. Financial setbacks may be out of your control, but that doesn’t mean you must quit, she said.

“This might mean you need to modify your dream by taking less classes at a time, going to community college, and/or graduating late,” Silva said. “All of that is OK because it’s not about how long it takes you, but it’s about you getting there.”