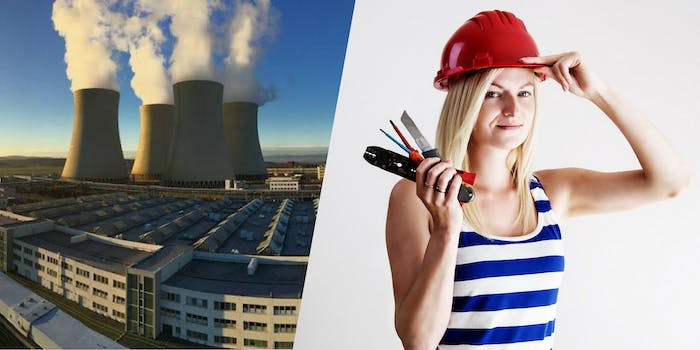 In this competition, no one wins.

One nuclear power station’s internship opportunity somehow turned into a chance to become the Czech Republic’s next top swimsuit model.

According to CNN, Czech power plant CEZ’s Temelín station staged a social media swimsuit contest to determine which of its 10 candidates would win a two-week internship with the company. The contest for “Miss Energy 2017” featured photos of 10 high school graduates in two-piece bikinis and hard hats (in the Czech Republic, students ages 6-15 go complete primary education, and secondary education is completed four years after).

Czech power plant company had women compete in a bikini contest to get hired as interns: https://t.co/DMINuvuekK pic.twitter.com/Y87DYYJKJ4

“We think photographs are very tasteful,” the company wrote in a comment on the post, which has since been deleted. “The combination of beauty and the industrial environment gives an interesting result.”

A spokesperson for CEZ told the Independent that the company offers an estimated 900 internships and trips for students annually. Ostensibly, the winner of this specific contest would have the ability to choose her internship based upon her preferences—so, if she was interested in journalism, her two weeks could have been spent in the press office.

“In these cases, [we] promote specific issues (mainly corporate social responsibility). In this case, the participants of the Czech beauty contest Maturantka Roku, translated as the Graduate of the Year were photographed in the environment of the Temelin power plant,” the spokesperson said.

While an argument could be made that a nuclear power plant is subverting sexist stereotypes by showing that women can be both attractive and smart, the argument folds under the basic premise of the contest: 10 women are judged simply for their physical attractiveness for an opportunity that has absolutely nothing to do with how they look—that is, unless the two-week training is less of an internship and more of an opportunity to be office “eye candy.”

Facebook users showed little mercy in sharing their criticism over the swimsuit competition.

“You’re one of the worst examples of science I’ve seen in my whole scientific life,” one user wrote, reviewing the company on Facebook.

“This is not about being a liberal, a conservatist [sic], a feminist or whoever. Seriously, if you think that the internship in a field of engineering should be given to the prettiest person you are a complete moron,” another shared.

Two days after posting the contest, CEZ apologized on Facebook for the pageant and wrote that all 10 women would be offered internships.

“The purpose of the competition was to promote technical education. But if the original vision raised doubts or concerns, we are very sorry,” the company’s post read.