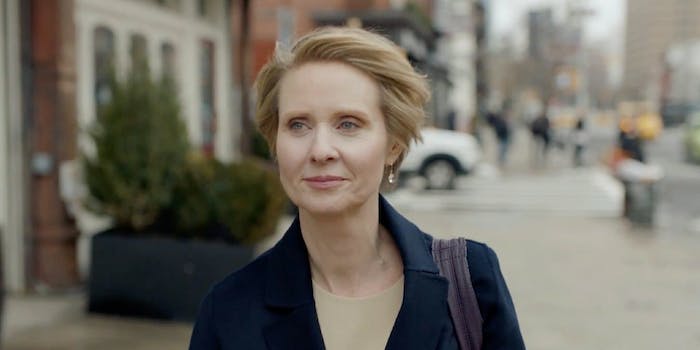 Pot shops do not erase slavery.

Black leaders have criticized a proposal made by New York gubernatorial candidate Cynthia Nixon, suggesting that prioritizing communities of color for cannabis licenses could be a “form of reparations.”

In an interview with Forbes published Saturday given during this weekend’s NYC Cannabis Parade, Nixon said that communities most affected by marijuana arrests should have priority for selling marijuana.

“Now that cannabis is exploding as an industry, we have to make sure that those communities that have been harmed and devastated by marijuana arrests get the first shot at this industry,” Nixon told the publication. “We [must] prioritize them in terms of licenses. It’s a form of reparations.”

Nixon told Forbes that she made cannabis a focus on her campaign because of its duality as a racial justice issue—”we’re incarcerating people of color in such staggering numbers,” she said.

To be sure, Nixon’s initial concern with prioritizing cannabis licenses isn’t for nothing—in New Your City, Black and brown people were nearly 10 times more likely to be arrested for marijuana possession in 2017, despite white people being just as likely to use the substance. People of color also made up 86 percent of marijuana arrests that year. And while businesses are trying to get in on the weed booms in Colorado, Oregon, and California, previous drug convictions often prevent people of color with marijuana experience from participating.

Similar to Nixon’s proposal, Oakland has developed a program prioritizing people with past marijuana convictions for business licenses, and Massachusetts has launched the first state-wide program in the same vein. But addressing the racial inequality that fueled the war on drugs does not reparations for hundreds of years of slavery make.

On Twitter, Rev. Al Sharpton wrote that he supports legalizing cannabis and likes Nixon, but “putting pot shops in our communities is not reparations,” then suggested that health care and education should be Nixon’s focus.

I’m for legalizing marijuana and I like Cynthia Nixon but putting pot shops in our communities is not reparations. Health care, education !!

In a statement to the New York Daily News, Black Lives Matter of Greater NY called Nixon’s statement “offensive and ignorant, and called for the candidate to apologize for suggesting that access to businesses would qualify slavery and the era of Jim Crow.

“It does a disservice to our community for her to play into harmful stereotypes of African-Americans as drug users and dealers,” the group said in a statement. “And it does an even greater disservice to the enduring consequences of both slavery and Jim Crow and the inequities these systems of oppression perpetuated to claim that legalizing marijuana would somehow erase that experience.”

New York Gov. Andrew Cuomo, who previously called marijuana a “gateway drug,” has ordered a state study on the issue of legalization.