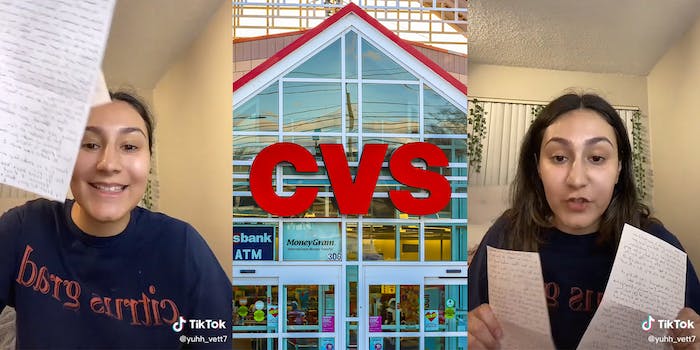 ‘This is why women just can’t say no’: CVS worker harasses former co-worker relentlessly after she quits

'I feel so scared to even be at home.'

In a now-viral TikTok, a former CVS employee says that her ex-co-worker sent her a letter using the address off of her resume after she blocked his number for harassing her, sparking discussion about workplace harassment in the comments.

In the video posted by TikToker Yvette (@yuh_vett7) on Saturday, she says that after she quit CVS, she asked her former co-worker that she used to enjoy talking to to grab drinks, which began a period of him “bombarding [her] with messages, trying to call [her], and trying to FaceTime [her.]”

She says that she explained to her ex-co-worker that she was busy and apologized for not responding to his calls and texts but that “he got really upset with [her] for not trying to reciprocate the same attention he was giving.”

“This man writes a novel basically being like, ‘You have issues. Why would I be interested in you? You’re a literal piece of shit,'” Yvette says in the video. “After this point, I’m like, you know what? I’m going to block this guy because he clearly got offended by me just asking him a simple question.”

Several weeks after she blocked the former co-worker, Yvette says that she decided to unblock him because she thought “he probably left [her] alone.”

“He continues to message me. So at this point in time, I’m like, ‘You know what? You need to leave me alone. I am not interested in talking to you,'” Yvette explains. “I send him that message and I block him again.”

Yvette then shows a letter she received in her mailbox from the man in which she says he “tries to prove to [her] that he doesn’t like [her].” The handwritten letter seems to be two pages long, including the front and back.

“I have let him know that if he tries to contact me again, I will contact the police,” Yvette says. “This is why it’s so hard for women to say no.”

The video is captioned, “THIS IS WHY WOMEN CAN’T JUST SAY NO. BTW he found my address on my resume that I sent him MONTHS ago for a job opportunity when he wasn’t acting like this. I feel so scared to even be at home.”

The video has amassed over 311,000 views as of Wednesday, with commenters urging Yvette to go to the police now instead of waiting for him to contact her again.

@yuhh_vett7 THIS IS WHY WOMEN CANT JUST SAY NO😡 BTW he found my address on my resume that I sent him MONTHS ago for a job opportunity when he wasn’t acting like this. I feel so scared to even be at home. #fyp #womenshealth #womensrights ♬ original sound – Yvette

“Make a police report about the letters & texts, him not stopping. It’ll serve as proof if you need a restraining order later,” one user suggested.

“Keep every message as evidence and seriously, I’d alert the police now so there’s history of it,” another wrote.

“Make a police report anyway. DEFINITELY Let your boss know and let his boss knows how he’s acting towards you,” a third added.

In a comment, Yvette says that she “filed a police report” and contacted the former co-worker’s boss to have a meeting about the situation.

The Daily Dot reached out to CVS via email and to Yvette via TikTok comment.