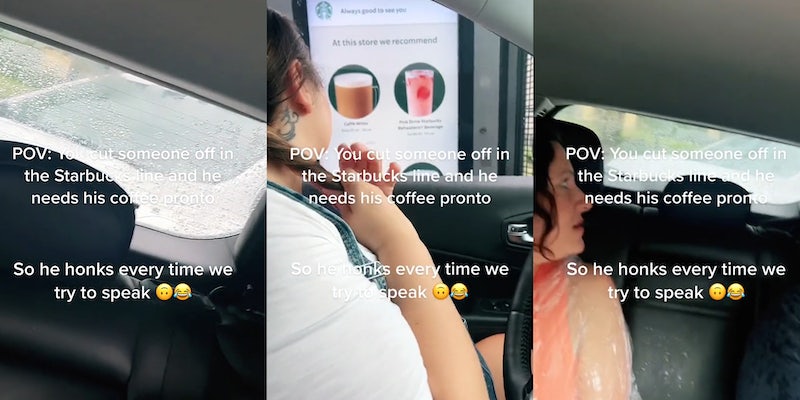 ‘I 100% would do this if you cut in the line’: Starbucks customer cuts in line, gets relentlessly honked at while trying to order, sparking debate

'Everyone saying they’d honk at them too in this situation, may I suggest anger management.'

After cutting in a Starbucks drive-thru line, a TikToker recorded the customer behind them relentlessly honking as they tried to place their order. Their now-viral video sparked debate in the comments about who was in the wrong.

In the clip, user Alyssa Springsteen (@alyssaspringsteen) films the car behind them honking as one of the people in the car tries to order.

“POV: You cut someone off in the Starbucks line and he needs his coffee pronto. So he honks every time we try to speak,” Springsteen wrote in the text overlay, claiming that they cut the customer off behind them. Bits of. the conversation between the person in the car and the Starbucks worker can be heard.

“We have a man behind us,” the woman says to the worker. As they repeatedly try to put in their order, the TikToker laughs each time the customer behind them honks.

Springsteen shared what happened after the seventeen-second clip, writing in the caption, “And then she paid for his order after he tried to fight up in the drive-thru.”

The video has amassed over 680,000 views since it was shared Tuesday, with many people in the comments section siding with the angry customer.

“His reaction is valid bc its not funny. Not cool to cut ppl off anywhere but glad y’all paid for his order as you should,” a second commented.

“There have been LONG and I mean LONG lines to Starbucks~ I would find it unfair for you to cut,” a third wrote.

Springsteen replied to the comment, clarifying the reason she cut in line, “Wasn’t intentional. There was a huge gap and we had to get out of the middle of the street. Thanks for your unwanted opinion though.”

Despite Springsteen’s explanation, many viewers still backed the customer. However, there were a few people who disagreed with the customer’s behavior.

“Everyone saying they’d honk at them too in this situation, may I suggest anger management,” one person argued.

“I ACCIDENTALLY cut ppl off sometimes and always pay for them never had anyone throw a tantrum!” a second stated.

The Daily Dot reached out to Alyssa Springsteen via TikTok comment.