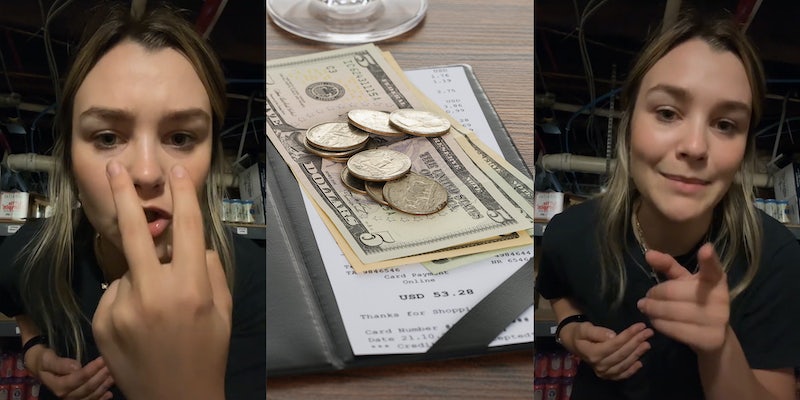 ‘I want to fight you out back’: Waitress blasts customer for tipping 10% after praising her performance

'Don’t they know we pay all of our bills in compliments!'

A waitress’s viral call-out of a table that left her a 10% tip after actively complimenting the service they received has created discussion around service and tipping on TikTok.

Posted by @cantstopthiswap, the video has been viewed more than 295,000 times on the platform. In it, she says the customer who tipped her 10% had praised her service directly.

“I just want everyone to know that if you tip 10%, but before you tip 10%, you say, ‘oh my god, thank you so much, everything was great and we had such a great time, you made me feel great,’ and you suck my titties with praises, and then you tip me 10%?” she says in the video. “That’s so rude.”

She goes on to say that she would rather they have been unkind to her if they were going to tip that low. For good service, the industry standard is around 15-20%, according to Bankrate.

“I would so much rather you stand up from your table and smack me across the mouth and say, ‘you are ugly, you are stupid, this was the worst service I have ever had,’ and then leave me $10 on $100. I would so much rather that and respect it because you looked me in the eyes like a person, and you stood up to me. But no, if you actively tell me, ‘you did a great job,’ and then you tip me 10%, (I) want to fight you out back.”

Viewers empathized with @cantstopthiswap, with many having had their own experiences with customers who did not tip well.

“And those be the same people that leave their number on the receipt thinking you’ll hit them up later,” one commenter wrote.

“And that 10% gets divided by the bar and the busboy and sometimes the host,” another viewer said. “Yeah thanks also making $2.65 an hour. Girl I feel you! Wish people knew!”

“Especially when they embellish the tip receipt with hearts and smileys and ‘you’re awesome!’ and random inspiring hashtags like what,” a third added.

However, some viewers criticized the idea that waitstaff is entitled to a tip, despite providing a service.

“Girl at least they tipped you at all,” one commenter wrote.

“Unfortunately there’s a recession,” a second argued. “Not everyone has that extra money.
The food already cost a lot. Ask our government for more money.”

“But sometimes it’s all I have, or I’m on budget and I can’t tip more, we’re all struggling here my dear,” a further user said.

The Daily Dot reached out to @cantstopthiswap via Instagram direct message regarding the video, but did not receive a response as of press time.