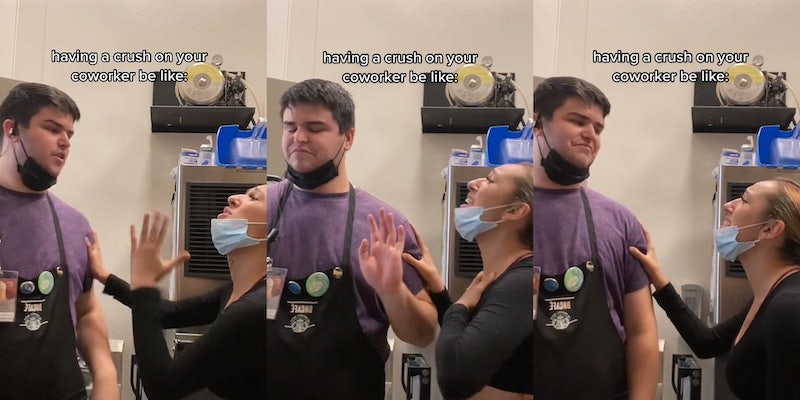 ‘Provides entertainment for the staff and awkwardness for the two involved’: Video on what it’s like to have a crush on your co-worker sparks debate

'The potential drama is why I am too terrified to do anything about it.'

A TikTok skit about having a “crush on your co-worker” has sparked debate about relationships at work, with some commenters advising against it entirely.

In the video posted by TikToker Jordan (@jorlala) on Sept. 4, she lip-syncs with her co-worker using audio from Little Women that says, “It’s no use, Jo. We’ve got to have it out. I have loved you ever since I have known you, Jo. I couldn’t help it.” The two work at the Barnes & Noble Cafe as baristas.

The caption reads, “Have y’all ever dated a coworker? How did it work out?”

@jorlala Have y’all ever dated a coworker? How did it workout?🥴🥴🥴 #barista #coworkercrush #coworkersbelike #worklife #relatable ♬ original sound – imogen ;)

The video reached over 133,000 views as of Sept. 20, with commenters discussing the downsides of dating a co-worker, many saying that it contributes to work “drama.”

“It provides entertainment for the staff and awkwardness for the two involved LMFAO,” one user said.

“Ngl I have a crush on a coworker and the potential drama is why I am too terrified to do anything about it,” another revealed.

“The coworkers at my job who broke up could not be together so the guy just quit,” a third added.

However, others shared their own positive experiences with dating a co-worker.

“I did. met him at outback!! we worked together for like 3 months, but still dating him almost 4 years later,” one commenter shared.

“We were coworkers for months and now we been together for 2 years and going strong!!” another said.

The Daily Dot reached out to Jordan via Instagram direct message.