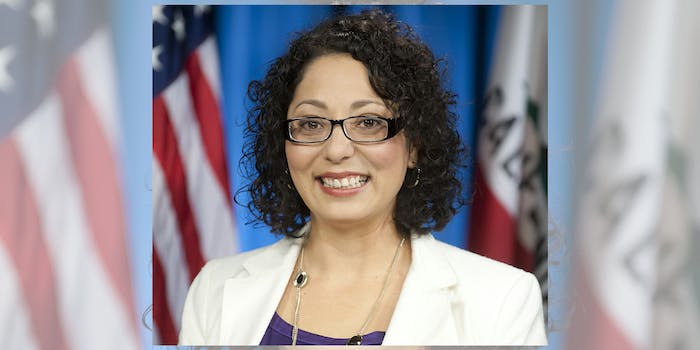 Assemblywoman Cristina Garcia has been accused of groping and making inappropriate advances.

A California assemblywoman leading the Me Too movement against sexual assault and harassment is being investigated for misconduct after two men, a former staffer and a lobbyist, said she groped them.

According to Politico, Assemblywoman Cristina Garcia, who has become a “high-profile” activist regarding sexual harassment in the Capitol, is said by these men to have made inappropriate advances toward them.

One former legislative staffer, Daniel Fierro, recently told his former boss, Assemblyman Ian Calderon, that in 2014, Garcia rubbed his back, groped his rear, and attempted to grope his crotch after a legislative softball game. Politico has confirmed the account with two Assembly staffers and colleagues of Fierro who Fierro had told immediately after it happened. Fierro said Garcia was inebriated at the time of the incident.

A second man, a lobbyist who has remained anonymous, said Garcia attempted to grope his crotch and told him she wanted to have sex with him at a fundraiser in 2017. He said he was attempting to leave the fundraiser partially to avoid Garcia, who he said had been “increasingly flirtatious” and had asked him several times to get drinks.

“She came back and was whispering real close and I could smell the booze and see she was pretty far gone,’’ he said. “She looked at me for a second and said, “I’ve set a goal for myself to fuck you.”

At that point, Garcia “stepped in front of me and reaches out and is grabbing for my crotch,’’ he said. That was “the line in the sand,” according to the lobbyist, and he stopped her. “I was four inches from her, eyeball to eyeball — and I said, ‘That ain’t gonna happen.’”

Another former legislative staffer who remained anonymous told Politico that Garcia was “known to speak about sexual issues to young staffers,” sometimes in graphic detail and that she was occasionally a hard drinker.

Garcia has been a vocal supporter of the Me Too movement and was even included in the photo composite of Time‘s Persons of the Year issue as one of the “silence breakers.” As part of Fierro’s report, Garcia is currently under investigation by a law firm as ordered by the Assembly Rules Committee. In a statement, a spokesperson said Garcia was aware of the report, but not the details, though she denied recalling any inappropriate behavior.

“Every complaint about sexual harassment should be taken seriously and I will participate fully in any investigation that takes place,” Garcia’s statement read. “The details of these claims have never been brought to my attention until today. I can confirm that I did attend the 2014 legislative softball game with a number of members and my staff. I can also say I have zero recollection of engaging in inappropriate behavior and such behavior is inconsistent with my values.”