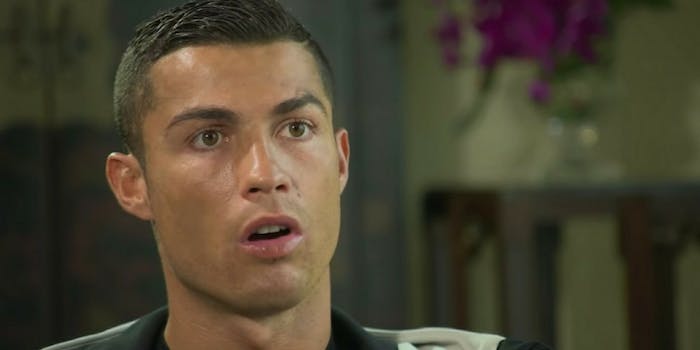 More than a decade ago, an anonymous woman entered a settlement with Cristiano Ronaldo after the soccer player reportedly raped her in his hotel room in Las Vegas. Last year, German magazine Der Spiegel reported on the settlement documents.

This week, however, the woman has identified herself as Kathryn Mayorga to the publication, and shared her detailed account of the assault with the publication. Ronaldo has called Mayorga’s account “fake news,” and his legal representation has criticized Der Spiegel‘s reporting and expressed intent to sue the publication.

According to Deadspin’s synopsis of the report, in June 2009, Mayorga, 25 at the time, had met Ronaldo, then 22, at a nightclub at the Palms Casino. Ronaldo had taken her by the arm and insisted she join his friends before convincing her to let him buy her a drink. After asking for her number, Ronaldo called Mayorga later that night and invited her and her friend Jordan to his hotel room, with his friends present.

As Mayorga was changing into a bathing suit in the bathroom, Ronaldo entered the adjoining bedroom and reportedly exposed himself to her, asking her to touch his penis and perform oral sex on him. He then let her leave the room in exchange for a kiss, but she says he pulled her back in. Despite protesting multiple times, saying no, and attempting to block him, Mayorga says Ronaldo anally raped her.

She told the publication she didn’t process what happened until she got into her car. She drove herself to the hospital but was too afraid to go in, but went to the police and filed a report the next day. She resisted naming Ronaldo, because of his celebrity, and only referred to him as a “professional athlete.” Mayorga finally named Ronaldo as her assailant in a full statement to police, with the help of her attorney.

At the time, Mayorga’s lawyer recommended a private settlement instead of pursuing a lawsuit, and the two parties agreed upon $375,000, provided Ronaldo’s lawyers read him a letter she had written. However, upon Der Spiegel‘s reporting on the documents last year, Ronaldo’s lawyers denied the existence of the letter, leading Mayorga’s current legal representation to question if the settlement was ever fulfilled.

Mayorga’s lawyer, Leslie Stovall, has filed a suit in Nevada seeking to have the settlement voided.

“That question never let me go,” Mayorga told Der Spiegel, in wondering who else Ronaldo may have assaulted. Mayorga said she wanted her case to go public to possibly help others come forward.

Ronaldo’s legal representation have responded to the magazine’s report, not by denying its validity as they did with the previous report, but by calling the article “blatantly illegal” and an invasion of Ronaldo’s privacy. Ronaldo, in turn, has called the report “fake news” on an Instagram livestream, and says Mayorga is attempting to become as famous as he. However, documents revealed by the publication show that Ronaldo, when originally asked by his legal representation, acknowledged that Mayorga repeatedly denied his advances and said “no” during the encounter.

A reporter on the piece, however, responded to both critiques on Twitter in a 24-part explanation of the publications reporting, denying that Ronaldo’s privacy is not a reason to forbid publishing of such rape allegations, and denying Ronaldo’s lawyers’ assessment that the article is a “piece of journalistic fiction.”

This is a thread about the rape allegations vs. @Cristiano: About our research @derSpiegel, about Ronaldo's reaction and a little insight into why the alleged victim Kathryn Mayorga speaks out about the case nine years later. This is the story btw: https://t.co/fwv26PhCSx 1/24

You can read the entire Der Spiegel report in English here.

Update 12:55pm CT  Oct. 3: On Wednesday, Ronaldo tweeted out a statement in Spanish and English denying that he had raped anyone and that the article ran by Der Spiegel was a “media spectacle” launched by someone looking to “promote themselves at [his] expense.”

“I firmly deny the accusations being issued against me. Rape is an abominable crime that goes against everything that I am and believe in. Keen as I may be to clear my name, I refuse to feed the media spectacle created by people seeking to promote themselves at my expense,” Ronaldo wrote. “My clear conscious will thereby allow me to await with tranquillity the results of any and all investigations.”

I firmly deny the accusations being issued against me. Rape is an abominable crime that goes against everything that I am and believe in. Keen as I may be to clear my name, I refuse to feed the media spectacle created by people seeking to promote themselves at my expense.

My clear conscious will thereby allow me to await with tranquillity the results of any and all investigations.