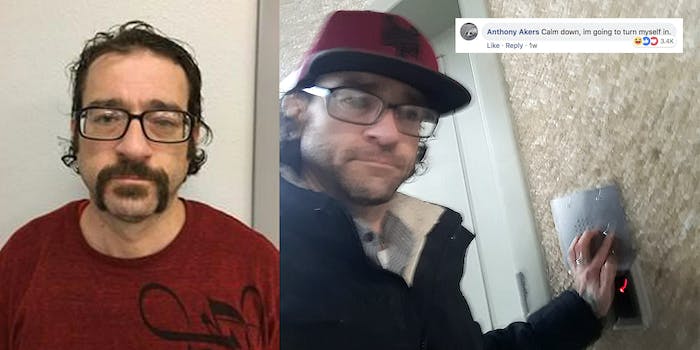 An absconding criminal turned himself in after a week of publicly chatting with police department on their Facebook post.

A Washington man who was wanted for failing to comply with the terms of his probation responded to his own mugshot on the police department’s Facebook page. What ensued was in a week-long back-and-forth before he finally turned himself in.

Richland Police Department put up a photo of Anthony Akers, 38, on their Facebook page on November 28, as part of their “Wanted Wednesday,” a way for them to interact with the public on social media and raise awareness about wanted criminals. Richland Police told BuzzFeed News that Akers had a warrant out for his arrest over his probation but didn’t know off-hand what his original crime was.

Wanted Wednesday! Anthony Akers (38) is wanted by the Department of Corrections for Failure to Comply. If you have any information please call 509-628-0333.

A conversation continued in the comments section of the post, and the police department even offered to pick him up.

“Richland WA Police Department thank you, tying up a couple loose ends since i will probably be in there for a month. Should be in there in the next 48 hours,” Akers responded.

The public became very emotionally invested in this conversation, checking the comments to see if Akers had followed through with his promise. His original comment had 4,500 reactions on Facebook as of Friday morning.

A few days later, Akers responded in jest, “Dear RPD, its not you, its me. I obviously have commitment issues. I apologize for standing you up, but let me make it up to you,” he wrote. “I will be there no later then lunchtime tomorrow, I know you have no reason to believe me after what i did to you, but I promise that if i dont make it on my own by lunchtime tomorrow I will call for a ride to assist me with my commitment issues. Thank you in advance to your response if you are patiently giving me another chance with us, I know i dont deserve it.

“I would really like an update tomorrow to see if he actually shows up this time. You know, lunchtime….. he basically promised,” wrote a member of the public in comments.

One Facebook user asked the obvious the question: “Why can’t you ping his location and pick him up?” which received a series of “angry” reactions.

Finally, two days ago, Akers uploaded a selfie in the comments section with the caption, “Here for our date sweetheart😤,” which garnered a slew of reactions as well, all positive.

Akers even made a few fans in the process. “Anthony Akers you’re hilarious! Can we be friends?” one person commented on his selfie.

“Anthony Akers you seem like you have a great heart,” wrote another. “I really hope you get help, you have a lot to offer! 😉”

Richland Police Sgt. Drew Florence confirmed with BuzzFeed News that Akers turned himself in on Tuesday at Benton County Jail. Its jail records show Akers is being held on felony charges.