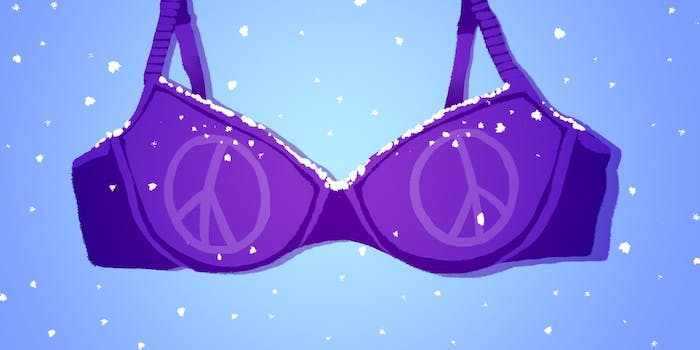 Close Encounters of the Casual Kind: Craigslist was teeming with snowstorm sex this weekend

What a wild, wild weekend we just had.

Studies have shown that people tend to get it on during mild natural disasters like blizzards. But what’s really interesting is the way we hook up during storms.

On Saturday, the white-capped peak of Winter Storm Jonas‘ visit to the East Coast, NPR ran a segment on increased birth rates nine months after a storm. According to research conducted by three prominent university economists, conception rates spike during blizzards, tropical storms, and other weather patterns that keep people nestled indoors but not necessarily scared for their lives.

However, not everyone was making babies this weekend as two feet of fluffy frozen water piled up across a wave of eastern states. For many residents of New York, D.C., Baltimore, and Philly, the blizzard was an opportunity to engage in kinky snow fantasies, try out a variety of virtual sex tools, and bury their faces deep in piles and piles of cocaine.

One D.C.-area m4m offered himself to “snow plow drivers or anyone driving in storm” in order to fulfill a fantasy that had likely laid dormant since, oh, last February.

In Philly’s Chestnut Hill neighborhood, a “sexy tight panty boy” sought assistance from “a guy with a snow plow to plow my driveway then plow me.”

Barter is truly a beautiful thing. The weather really brought New Yorkers together in Queens, where one man offered to shovel driveways in exchange for “favors.” The magical snowdrifts even caused some Craigslist users to become more open-minded: a Brooklyn lady posted an ad saying she needed “a man to shovel, snow blow, or plow” in exchange for some heavy petting. Midway through the ad, she declared: “Guess you could be a women (sic) too. I don’t care as long as someone will shovel for me.” 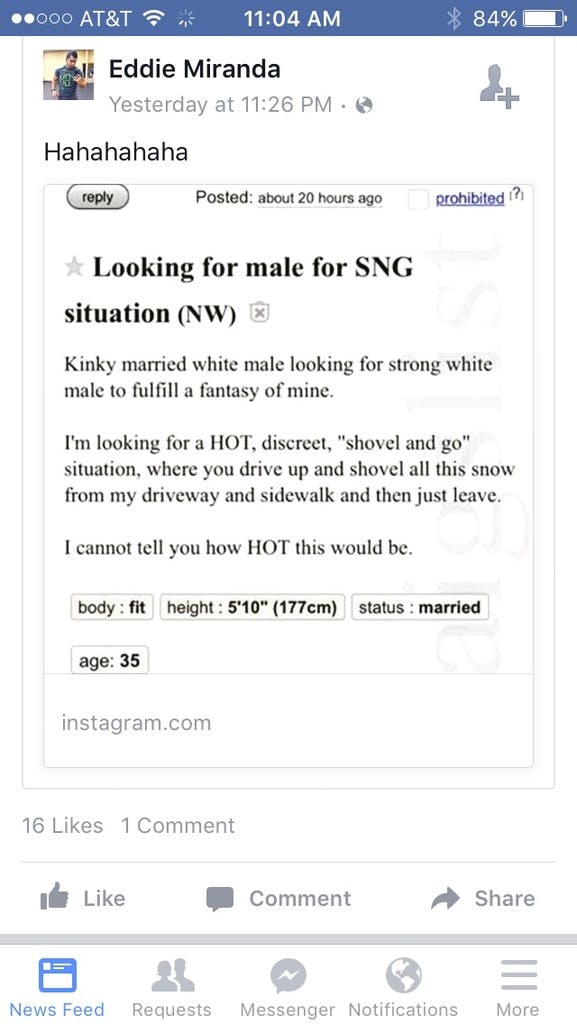 The kinks come out in the darkness of winter, it seems. In Philly, one submissive “chubby guy” announced that he’d been shoveling snow and moving furniture all morning and was ripe and ready for “sweaty chasers” looking for an erotic whiff of body odor. And in Baltimore, a Craigslist user posted a fantasy involving white snow and red menstrual blood. If it was ever your fantasy to get it on with a sanitation worker, you missed out on Staten Island this weekend, where a “sandman” scanned Craigslist for babes to cool him off after long shifts salting the icy streets.

While the majority of ads in Casual Encounters seemed like thinly-veiled attempts at getting someone else to clear the driveway, a good number of people decided that virtual sex was the most convenient way to get through being snowed-in.

A rather nihilistic sex ad in Baltimore flatly declared “I can’t get to you, you can’t get to me” before offering a torrid chat session. In Manhattan, a m4w was sought for “cyber fun: snow storm edition.” And in Long Island, a guy who claimed to be “shoveling my driveway naked” sought a partner to sext and “flurt” with while he watched two seasons of True Detective.

Last but not least, Winter Storm Jonas provided an excellent base for cocaine puns. In a flurry (sorry) of Casual Encounters posts, city dwellers in love with the coco made their plans known.

An “ambitious professional” New Yorker offered a warm and cozy spot for a lovely lady-friend to join in some “skiing indoors with some great quality snow.” As New Yorkers love their coke-fueled sex parties, another m4w there sought a cutie to “hit the slopes” with and “plow some snow” at his apartment.

As it turns out, sex is a great way to stay warm during the frozen Northeast winter. And if you missed out during Jonas, fear not. Follow the advice of famed sexologist Dr. Ruth Westheimer, who tweeted a message of consolation on Friday.

“If you don’t have a partner to snuggle with during the blizzard,” read Westheimer’s tweet, “Make a project of getting a date for Valentine’s.”