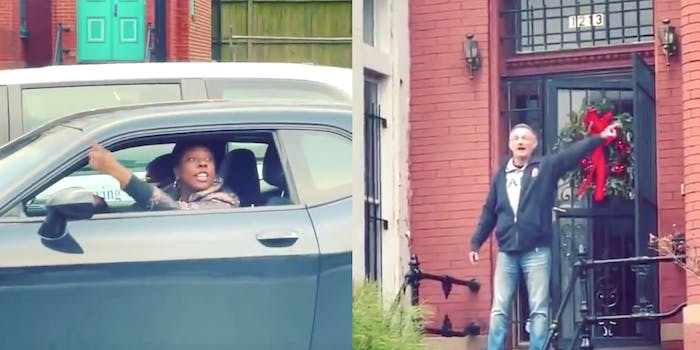 'If that was Black Lives Matter, they’d have tanks rolling down Pennsylvania Avenue.'

Americans watched on Wednesday as President Donald Trump’s rally to protest the presidential election gave way to a riot and invasion of the U.S. Capitol in Washington, D.C. Amid the chaos, journalist Veronica Westhrin captured a conversation that offers insight into how some D.C. residents felt about the rally and everything it dragged in.

The video shows a man shouting from his porch, going back and forth with a woman stuck in traffic due to the mass exodus of Trump supporters leaving downtown. As the clip begins, the man yells toward the stream of Trump supporters moving through his neighborhood. “Get out of town! Fucking treasonous pieces of shit,” he says.

A brief time jump brings the woman into the conversation. She calls out from her car to the man that the rioters “really destroyed our city.”

“And it’s like nobody gives a shit!” the man yells. “If that was Black Lives Matter, they’d have tanks rolling down Pennsylvania Avenue. But they let these fucking crackers take over the goddamn Capitol! What the fuck is that?”

“It’s true. It makes me teary-eyed,” the woman shouts back. “If it was us, Black Lives Matter, we couldn’t even do none of that. We’d die.”

The video went viral both for the truth being spoken by both residents regarding the police response to MAGA rioters vs. Black Lives Matter protesters and for the small glimpse into what they have to put up with when things like this happen in D.C.

“This is a fantastic video. Perfect slice of life & incredibly moving & the perspective that all the news crews miss when focusing on the hooligans,” tweeted user @_cynar.

@ImaLiberal66 added, “This man’s rage and woman’s tears sum up my day perfectly!”

Over the past four years, we’ve gotten endless profiles on rural voters as the media tried to make sense of Trump’s America, but maybe it’s time to turn the focus to everyday Americans like this instead. It sounds like they have plenty to say.