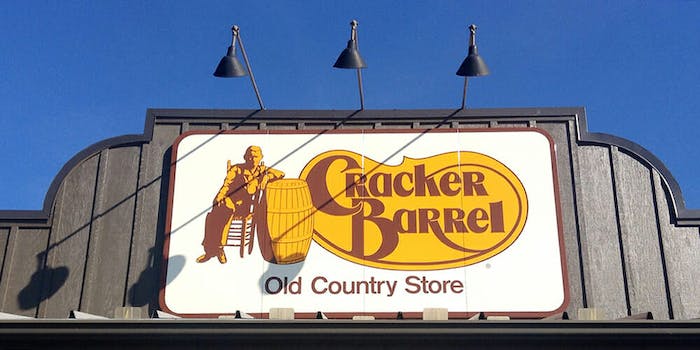 The chain has turned away from its ant-LGBTQ past.

A church affiliated with a homophobic pastor will not be allowed to host an event at Cracker Barrel, a restaurant franchise with a history of anti-LGBTQ policies.

Pastor Grayson Fritts of All Scripture Baptist Church, who is also a detective at a sheriff’s office in Knoxville, Tennessee, is under investigation after a video surfaced showing him calling for the death of gay people earlier this month.

“I’m sick of sodomy getting crammed down our throats,” he said in an explosive speech, his voice sporadically rising to a scream. “It’s infecting our nation people.”

“He said they should surely be put to death,” he continued later. “Just kinda driving home the death penalty for someone being a homosexuality.”

On Tuesday, Twitter user @blake_kitterman called out Cracker Barrel for an event the church had scheduled at a franchise location in Cleveland, Tennessee. According to screenshots shared by Kitterman, the event was scheduled for June 29.

Hey @CrackerBarrel, a terroristic group that endorses arresting and executing LGBTQ+ persons are hosting an event at your restaurant in my hometown, Cleveland, TN. Care to stop this?

I’m gay and you have the power to ensure me and my boyfriend are safe from these extremists. pic.twitter.com/DVYruzWniN

The event, titled “Small town soul winning, Cleveland,” did not show up in the Daily Dot’s Facebook search on Thursday morning.

Cracker Barrel promptly responded to Kitterman on Twitter, denying any affiliation with Fritts and saying the restaurant “disagree[s] strongly with their statements of hate and divisiveness.”

“At Cracker Barrel, we work hard to foster a culture that is welcoming and inclusive—we have a zero-tolerance policy for discriminatory treatment or harassment of any sort,” the chain’s statement said, adding that the church was told its event could not be held at the Cracker Barrel location.

But Cracker Barrel was once known for denying employment based on sexual orientation. A policy the chain implemented in 1991 led to backlash and boycotts, according to the Advocate. Now, the restaurant has a non-discrimination policy that includes sexual orientation and offers resources for its LGBTQ employees. But the revised policies didn’t seem to undo its negative reputation as much as the latest move has.

1991: Cracker Barrel fires an employee because she was a lesbian and it went against their "family values."

2019: CB bans anti-gay pastor Grayson Fritts' event due to a zero-tolerance policy for "discriminatory treatment or harassment of any sort."

The very first protest march I attended was at a Cracker Barrel. They had fired a worker because she was a lesbian, citing their supposed "family values." I have been boycotting them ever since. I will now remove them from my list. So my never eating there is no longer a boycott.

We live in a world where Cracker Barrel is exercising moral authority. https://t.co/HldCqf6K95

Cracker Barrel’s progressive attitude is likely influenced by new CEO Sandy Cochran, who the Tennessee Democratic Party has lauded for overseeing improvements at the chain. On Tuesday, the party shared a letter asking Cochran to look into the Fritts’ event.

A letter to @CrackerBarrel CEO Sandy Cochran from @tndp chair @marymancini re: Grayson Fritts' church, All Scripture Baptist, hosting an event at their store in Cleveland, TN. pic.twitter.com/VI6carVyaY

It’s not clear where the All Scripture Baptist Church will hold its event now. The church did not immediately respond to the Daily Dot’s request for comment.